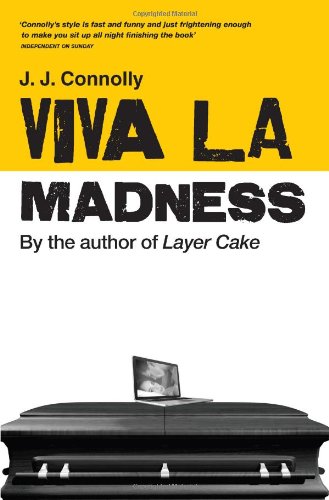 The authentic voice of British gangster fiction returns with a tour de force in this long-awaited sequel to Layer Cake, the bestselling debut by J.J. Connolly that 'jump-started British crime fiction into the present' (Uncut). More authentic in its language and scene-setting, smarter in its characterisation and plotting than anything that had previously gone by the name of gangster fiction, Layer Cake attracted a big cult following and became a Crime bestseller (it also became the most shop-lifted book in Britain). The Get Carter of the noughties, Layer Cake has also been made into a highly-praised film by Matthew Vaughn, starring Daniel Craig, Michael Gambon and Sienna Miller. Now J. J. Connolly is back with a sequel that sees him on the same stunning form, with his trademark razor-sharp dialogue and quick-fire violence, but also finding dark humour and pathos in the lives of violent men. From the many levels of the London underworld portrayed in Layer Cake, Viva la Madness moves to international crime with trans-Atlantic drug deals, money laundering and high-tech electronic fraud, portrayed with the same uncanny believability. The anonymous hero of Layer Cake is pulled back into the drug game before he can escape to a sunny retirement: in an authentic but dazzling combination of London low-life, Caribbean high-life and Venezuelan drug cartels toting machine-guns in Mayfair. The brilliance and the madness is back:'Viva la madness!'

'Connolly's style is fast and funny and just frightening enough to make you sit up all night.' --Independent on Sunday

'Masterful plotting double-crosses abound a cracking pace and some truly excellent set pieces including a chase through the London underground all lead up to a wham bam ending. Fast, furious, funny and highly recommened for fans of Layer Cake and new readers alike.' --The Guardian

'One novel in and Connolly has hit the jackpot, jump-started British crime fiction into the present - Like good drug fiction you're given glamour and squalor, a voyeuristic thrill, and the bill.' Uncut on 'Layer Cake'. -- A gripping read...like the title suggests, its madness. Crime Fiction Lover. -- 'A name to whet the appetites of readers and critics alike.' --Francis Gilbert, The Times.

J.J. Connolly was born and brought up in north-east London. His first published story was in the Brit Pulp! anthology. He is the author of acclaimed bestseller Layer Cake, which he adapted into a film script for Sony Pictures and director Matthew Vaughn. Viva la Madness is his second novel.