Articoli correlati a The kremlin's candidate 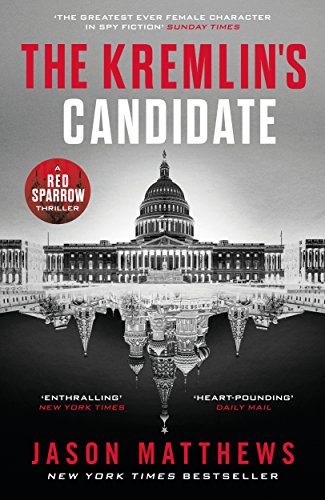 Urgent, topical and shot through with insider knowledge, the final thriller in the Red Sparrow trilogy is writing on a grand scale.

Russian counterintelligence chief Colonel Dominika Egorova has been an asset of the CIA for over seven years. She has also been in a forbidden and tumultuous love affair with her handler Nate Nash, mortally dangerous for them both, but irresistible.

In Washington, a newly installed administration is selecting its cabinet members. Dominika hears whispers of a Russian operation to place a mole in a high intelligence position. If the candidate is confirmed, the Kremlin will have access to the identities of CIA assets in Moscow, including Dominika.

Dominika recklessly immerses herself in the palace intrigues of the Kremlin, searching for the mole's identity and stealing secrets before her time runs out.

With a plot ripped from tomorrow's headlines, The Kremlin's Candidate is a riveting read and a thrilling conclusion to the trilogy than began with Red Sparrow and Palace of Treason.

Matthews beguilingly blends the fun and sexiness of Ian Fleming with the more procedural, information-rich approach of John le Carre and Frederick Forsyth (The Sunday Times)

The finale to the Red Sparrow Trilogy is both timely and timeless; an espionage tale that takes the reader behind and beyond the headlines of Russia's assault on America. If anyone doubts that we are in the midst of Cold War II, The Kremlin's Candidate will erase those doubts, page by eye-opening page. Matthews's writing is elegant and self-assured, and we know we are in the capable hands of a man who is writing about what he knows and who he knows. Twenty-first-century spy novels don't get any better than this. (Nelson DeMille)

Matthews spins a mighty operational web replete with exacting tradecraft. His descriptive precision is breathtaking; the sparring between his vividly realized characters is devilishly clever. With nail-biting suspense, scorching eroticism, dark wit, lashing contempt for politicians dismissive of intelligence work, and fury over Russia's disinformation campaigns, this is a riveting and knowing dramatization of today's clandestine geopolitical conflicts (Booklist)

A stellar conclusion... races to a heart-pounding and unexpected resolution. (Publishers Weekly)

Matthews beguilingly blends the fun and sexiness of Ian Fleming with the more procedural, information-rich approach of John le Carre and Frederick Forsyth (The Sunday Times)

Dominika Egorova, of the Russian Intelligence Service, is one of the most complex and compelling heroines to grace the espionage genre ... Matthews's scene-setting is superb, and he has a fine eye for telling details ... Palace of Treason shimmers with authenticity (New York Times)

Sublime and sophisticated ... a fast-paced thriller ... as noteworthy for its superior style as for its gripping depiction of a secretive world (Washington Post)

Jason Matthews is the real deal. As an Operations Officer in the CIA, his brief was simple: steal secrets from the opposition and protect his own. Over a thirty-three-year career, Matthews served in multiple overseas locations, specializing in denied-areas operations and national security. He conducted agent recruitment in key counter-proliferation regions, including the Soviet Union, Eastern Europe, East Asia, the Middle East and the Caribbean. As a retired chief in various CIA stations, there are few people on the planet better positioned to write about the thrilling world of espionage, intelligence and counter-terrorism.