Articoli correlati a Dear Ijeawele, or A Feminist Manifesto in Fifteen Suggestion...

Dear Ijeawele, or A Feminist Manifesto in Fifteen Suggestions 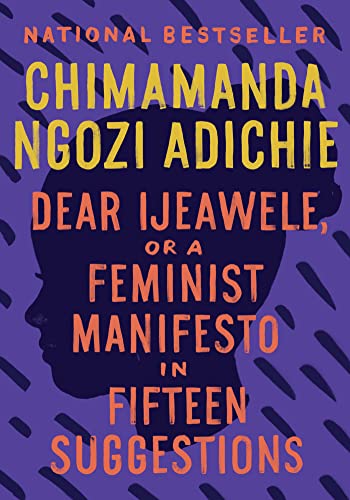 An instant feminist classic, and perfect gift for all parents, women, and people working towards gender equality. Here is a brilliant, beautifully readable, and above all practical expansion of the ideas this iconic author began to explore in her bestselling manifesto, We Should All Be Feminists.

A few years ago, Chimamanda Ngozi Adichie received a letter from a dear friend from childhood, asking how to raise her new baby girl a feminist.
Although she has written and spoken out widely about feminism, Adichie wasn't sure how to advise her friend Ijeawele. But as a person who'd babysat, had loved her nieces and nephews, and now, too, was the mother of a daughter herself, she thought she would try. So she sent Ijeawele a letter with some suggestions--15 in all--which she has now decided to share with the world.
Compelling, direct, wryly funny, and perceptive, Dear Ijeawele offers specifics on how we can empower our daughters to become strong, independent women. Here, too, are ways parents can raise their children--both sons and daughters--beyond a culture's limiting gender prescriptions. This short, sharp work rings out in Chimamanda's voice: infused with deep honesty, clarity, strength, and above all love. She speaks to the important work of raising a girl in today's world, and provides her readers with a clear proposal for inclusive, nuanced thinking. Here we have not only a rousing manifesto, but a powerful gift for all people invested in the idea of creating a just society--an endeavour now more urgent and important than ever.

CHIMAMANDA NGOZI ADICHIE grew up in Nigeria. Her work has been translated into thirty languages and has appeared in various publications, including The New Yorker, Granta, The O. Henry Prize Stories, the Financial Times, and Zoetrope: All-Story. She is the author of the novels Purple Hibiscus, which won the Commonwealth Writers' Prize and the Hurston/Wright Legacy Award; Half of a Yellow Sun, which won the Orange Prize and was a National Book Critics Circle Award Finalist, a New York Times Notable Book, and a People and Black Issues Book Review Best Book of the Year; Americanah, which won the National Book Critics Circle Award and was a New York Times, Washington Post, Chicago Tribune, and Entertainment Weekly Best Book of the Year; and the story collection The Thing Around Your Neck. A recipient of a MacArthur Fellowship, she divides her time between the United States and Nigeria.

When a couple of years ago a friend of mine from childhood, who’d grown into a brilliant, strong, kind woman, asked me to tell her how to raise her baby girl a feminist, my first thought was that I did not know.

But I had spoken publicly about feminism and perhaps that made her feel I was an expert on the subject. I had over the years also helped care for many babies of loved ones; I had worked as a babysitter and helped raise my nephews and nieces. I had done a lot of watching and listening, and I had done even more thinking.

In response to my friend’s request, I decided to write her a letter, which I hoped would be honest and practical, while also serving as a map of sorts for my own feminist thinking. This book is a version of that letter, with some details changed.

Now that I, too, am the mother of a delightful baby girl, I realize how easy it is to dispense advice about raising a child when you are not facing the enormously complex reality of it yourself. Still, I think it is morally urgent to have honest conversations about raising children differently, about trying to create a fairer world for women and men.

My friend sent me a reply saying she would “try” to follow my suggestions.

And in rereading these as a mother, I, too, am determined to try.

Dear Ijeawele, or A Feminist Manifesto in Fifteen Suggestions