Articoli correlati a Portmahomack: Monastery of the Picts

Portmahomack: Monastery of the Picts 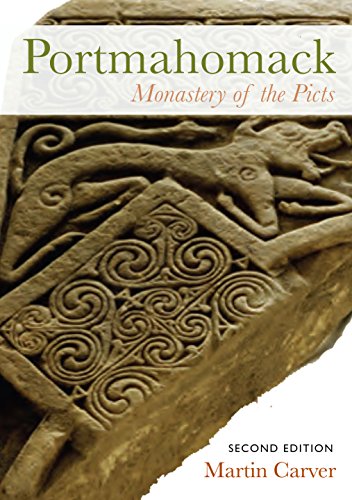 Portmahomack today is a serene fishing village on the Dornoch Firth, north east Scotland where archaeological excavations have written a new history of the origins of Scotland. This book brings alive the expedition and its discoveries, most famously a monastery of the eighth century in the land of the Picts.

Starting from chance finds of a Pictish carved stone in St Colman's churchyard, the archaeologists unearthed four settlements one on top of the other. An elite farm was succeeded by the Pictish monastery, which, following a Viking raid in AD800, became a trading place and then a medieval village. Scientific analysis shows at each stage where the people came from, their life-style and what they ate. Together it creates a story of the heroic adaptation of a European nation to new politics between the sixth and sixteenth century.

The Picts were the outstanding sculptors of their day, producing carved stone monuments equal to anything being made in contemporary Europe. They were Britons, who resisted the Romans invaders and created their own warrior nation in the north east of the island. Coming under pressure from the Scots and the Norse, they disappeared from history in the ninth century AD. Now archaeology is finding them again.

This massively updated new edition follows eight years intensive research on the huge assemblage of artefacts, human bone, animal bone and plant remains that were recovered. This has revealed a world of high mobility, rich in ideas and constantly changing it political orientation in a greater European context.

Beautifully written and beautifully clear... it is impossible to imagine a better example of complex and subtle ideas made comprehensible without distortion. --Peter Davidson, University of Aberdeen

This is the popular book of that (ten-year) project ... a true academic, Carver has the confidence to write fresh, clear, direct, prose. --Current Archaeology

A gripping tale of discovery and detection, at once accessible and scholarly. --William Dalrymple

1. Portmahomack: Monastery of the Picts (Paperback)

Descrizione libro EDINBURGH UNIVERSITY PRESS, United Kingdom, 2016. Paperback. Condizione: New. 2nd edition. Language: English. Brand new Book. This book deals with a key archaeology of one of the prime Pictish settlements in north east Scotland. This updated 2nd edition continues and develops the interpretation of a prime Pictish settlement site in north east Scotland, with new chapters exploring Iron Age, Medieval and European contexts of the settlement. Before 1996, no one assumed Portmahomack held a key to the understanding of the mysterious Pictish world. On discovery of an apparent monastery and settlement, the area soon became the subject of one of the largest research excavations ever to have taken place on the Scottish mainland. The monastery was destroyed between 780 and 830 AD and was then lost to history before being unearthed by Martin Carver and his colleagues. In this highly illustrated book, Martin Carver describes the discovery of the site and the design and execution of the research programme, then traces the events that occurred from the mid 6th century to the 11th century when the parish church was founded on the former monastic site. The book ends with the subsequent history of the church of St Colman and a study of the Tarbat peninsula.The author's conclusions advance the theory that this was a prehistoric place before the monks arrived, and that they marked out the boundaries of their estate in the late 8th century with the lives of local saints carved on some of the greatest stone sculptures of the age. This updated new edition presents results of 18 years of archaeology. It includes three new chapters. It features expanded conclusions and theories of Pictish life. It is a heavily illustrated edition. Codice articolo AAZ9780748697670

3. Portmahomack: Monastery of the Picts

4. Portmahomack: Monastery of the Picts

5. Portmahomack: Monastery of the Picts

7. Portmahomack: Monastery of the Picts