Articoli correlati a His Last Bow 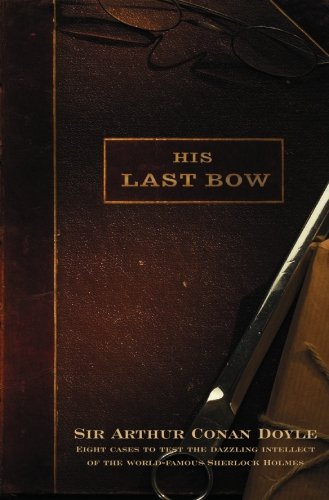 Sherlock Holmes and Doctor Watson embark upon eight thrilling investigations involving a body on the Underground; the unexplained disappearance of Lady Frances Carfax, and a parcel containing a pair of recently removed human ears. Finally, with the First World War looming, Holmes is encouraged out of cosy retirement on the South Downs to lend his unique intellect to the British Government. The fascinating, historic results are finally revealed in ‘His Last Bow’.

The creator of Sherlock Holmes, the world's most famous literary detective. Born in Scotland, Sir Arthur Conan Doyle was a practising doctor when he began to write tales of mystery and adventure. In addition to the Sherlock Holmes stories, Conan Doyle also wrote the Professor Challenger adventures, and his classic, The Lost World, is one of the original fantasy novels. Arthur Conan Doyle (1859-1930) was born in Edinburgh and studied medicine at the University of Edinburgh's Medical School. Graduating in 1881, he set up practice as an occultist, but as patients proved elusive he turned to writing. An important influence upon his literary career was his professor, Dr Joseph Bell, who could observe the most minute detail regarding a patient's condition. This master of deduction became the model for Conan Doyle's legendary literary creation, the detective Sherlock Holmes, introduced in ?A Study in Scarlet’ in 1887. Conan Doyle also espoused spiritualism and devoted considerable time and effort to a campaign of support for this cause. He also wrote successfully in genres other than detective fiction. His non-fiction includes military writing on the Boer War and pamphlets on spiritualism. It is known that he felt constricted at times by the popularity of Holmes, but it is nevertheless for Sherlock Holmes and his foil, the ponderous Dr Watson that he is best remembered. As Sherlock Holmes was the first detective to solve cases by deduction rather than due to an error by the criminal, Conan Doyle can be credited with creating the modern detective novel. He was knighted in 1902 for his support of the British cause in the Boer Wars. After the death of his son in the First World War, he devoted the rest of his life to spiritualism on which he wrote and lectured.