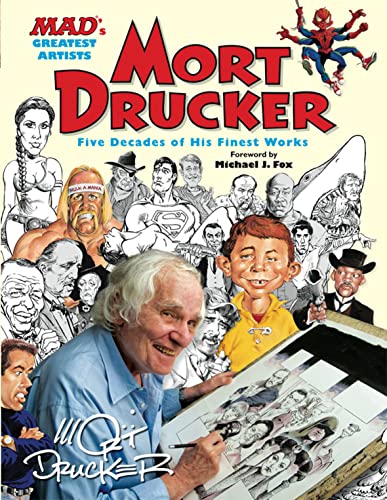 A contributor to MAD since its earliest years of the fabled humour magazine, Mort Drucker is recognized throughout the art world as one of the greatest caricaturists of the twentieth century. He has won numerous awards and honors including the National Cartoonists Society's prestigious Reuben Award, the Will Eisner Hall of Fame Award, and an honorary Doctor of Fine Arts degree from the Art Institute of Boston. Drucker's most famous features are his movie and television satires. From The Godfather to Star Wars , and from Hulk Hogan to Woody Allen, he has captured our culture's most popular characters with one master stroke after another. Michael J. Fox once told Johnny Carson on The Tonight Show that he knew he had made it when Mort Drucker drew his caricature in MAD . And George Lucas personally traveled to Drucker's Long Island home to convince him to illustrate the poster for American Graffiti .Drucker's greatest MAD works are collected here for the first time ever, hand-picked by the artist himself. It is a celebration that has been more than 55 years in the making!

George Lucas, Director, American Graffiti
Since I first read MAD Magazine as a kid, I've been drawn in by its mix of highbrow satire and lowbrow laughs that pokes very funny holes in the stuffiest of institutions. Mort Drucker's signature artwork captures and exaggerates the world around us and the people in it in a way that makes them more real. His caricatures are the best, and he is the artist that defines MAD for me.

When I had to choose an artist for the American Graffiti poster, Mort was the first and only person who came to mind. Since then, he's been redrawing my movies as funny parodies. You never mind being the subject of one of Mort's jokes, because he executes them so artfully.

Steven Spielberg, Director, Jaws
"Mort Drucker's timely sense of parody mixed with commentary first made me aware of the culture of our generation. Mort's irreverent and historical caricatures have never been nor will they ever be equaled. He poked fun at all my favorite movies when I was a teenager and when I was a filmmaker, he started going to town on the ones I was making and I loved every frame of his."

Joe Dante, Director, Gremlins
As a lifelong MAD devotee from the time it was a four-color comic, I can tell you that there are few thrills in life quite like seeing your own movie parodied in the pages of MAD! So you can imagine my shock and glee when I glommed on to the cover of the September 1984 “Grimlins” issue with Alfred E. Neuman as Gizmo, surrounded by horrified Gremlins holding their noses behind him. And even better, what was inside was almost too good to be true: several hilarious pages of clever spoofery by Stan Hart illustrated with the usual brilliant Mort Drucker comic art!
What an honor.
Let’s be clear—Mort Drucker is simply right up there with Hirschfeld as the master American caricaturist.
His pure, unmistakable graphic style has captured an astonishing array of 20th century celebrities and public figures. Even if you didn't know a performer’s name you could always place the face. His movie-like staging and composition were unmatched, and the result was artwork that could be revisited time and time again and still yield something new. That particular facet of MAD influenced many nascent filmmakers, including myself.
I never actually met the absurdly prolific Mr. Drucker, but I feel I know him through his years of work.
Now there’s a legacy few of us can even aspire to!

Mort Drucker personally presents his greatest works from his five-plus decade association with MAD Magazine. Drucker's caricature parodies of movies and TV shows are among the magazine's most popular features, and he is recognized as one of the top caricaturists of the last century.