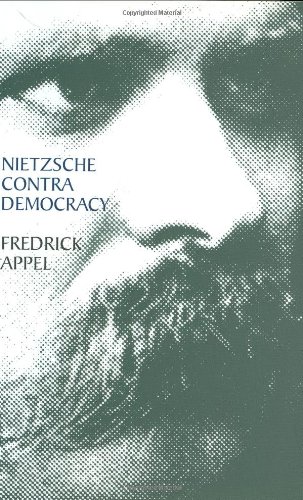 Apolitical, amoral, an aesthete whose writings point toward some form of liberation: this is the figure who emerges from most recent scholarship on Friedrich Nietzsche. The Nietzsche whom Fredrick Appel portrays is of an altogether different character, one whose philosophical position is inseparable from a deep commitment to a hierarchical politics. Nietzsche contra Democracy gives us a thinker who, disdainful of the "petty politics" of his time, attempts to lay the normative foundations for a modern political alternative to democracy. Appel shows how Nietzsche's writings evoke the prospect of a culturally revitalized Europe in which the herdlike majority and its values are put in their proper place: under the control of a new, self-aware, and thoroughly modern aristocratic caste whose sole concern is its own flourishing.In chapters devoted to Nietzsche's little discussed views on solitude, friendship, sociability, families, and breeding, this book brings Nietzsche into conversation with Aristotelian and Stoic strains of thought. More than a healthy jolt to Nietzsche scholarship, Nietzsche contra Democracy also challenges political theory to articulate and defend the moral consensus undergirding democracy.

Descrizione libro NCROL, 1999. Hardcover. Condizione: Good. Connecting readers with great books since 1972. Used books may not include companion materials, some shelf wear, may contain highlighting/notes, may not include cdrom or access codes. Customer service is our top priority!. Codice articolo S_294662551

Descrizione libro NCROL, 1999. Hardcover. Condizione: Good. A+ Customer service! Satisfaction Guaranteed! Book is in Used-Good condition. Pages and cover are clean and intact. Used items may not include supplementary materials such as CDs or access codes. May show signs of minor shelf wear and contain limited notes and highlighting. Codice articolo 0801434246-2-4