Articoli correlati a The Rites of Christian Initiation: Their Evolution...

Johnson, Maxwell E. The Rites of Christian Initiation: Their Evolution and Interpretation

The Rites of Christian Initiation: Their Evolution and Interpretation 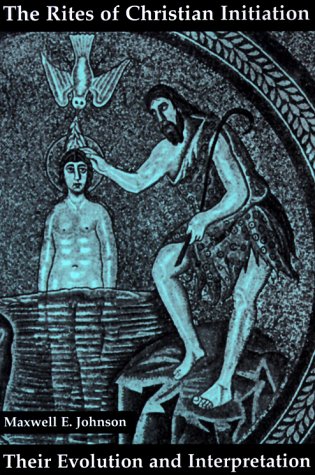 Growing from the author's experience in teaching the rites of Christian initiation at different levels, this study, together with selections of primary texts in translation, surveys the development and theology of those rites from their New Testament origins to their current shape in the Roman Catholic, Episcopal, and Lutheran Churches. It is intended for all who seek a solid, detailed, and challenging foundation for their ministries in the "Blessed Sacrament" of Baptism as the Third Christian Millennium dawns.

Maxwell E. Johnson, Ph.D., an ordained minister of the Evangelical Lutheran Church in America, is associate professor of liturgy at the University of Notre Dame.

In The Rites of Christian Initiation Maxwell Johnson surveys the development and theology of these rites from their New Testament origins to their current forms in the Roman Catholic, Episcopal, and Lutheran Churches. Together with abundant selections of primary texts in English translation, The Rites of Christian Initiation offers a critique of traditional scholarship, suggests new ways of looking at some of the classic sources, provides a critical assessment of selected contemporary rites, and calls for a recovery of an ecumenical-baptismal spirituality to guide the Churches as the third Christian millennium dawns. Written from the perspective of liturgical texts, history, theology, and pastoral implications of Christian initiation, The Rites of Christian Initiation provides in one volume an overall and detailed introduction to the initiation rites. As a companion volume to Living Water, Sealing Spirit, it takes account of the contemporary advances in scholarship on early Christian liturgical sources pioneered in Paul F. Bradshaw?s study The Search for the Origins of Christian Worship and the reconstructive insights of Thomas Talley on the early evolution of the liturgical year in his revolutionary Origins of the Liturgical Year. Chapter one begins with the New Testament origins of the rites. The next three chapters deal with the further evolution of those rites and related issues within the early Churches of the first few centuries: the pre-Nicene period, the first major period of liturgical change during the fourth and fifth centuries, and renewal in the fourth and fifth centuries in the East and West. Chapter five deals with baptismal preparation and the origins of Lent. Chapter six surveys what has been called for the West the disintegration of the rites of Christian initiation within the medieval period. Chapter seven addresses the change brought about by the Protestant and Catholic Reformations of the sixteenth century. Chapter eight surveys the development, current form, theological interpretations, and contemporary probes surrounding the initiation rites in some of the Churches of today; and chapter nine suggests several implications of a baptismal spirituality for the Churches today. While written especially with seminarians and students of liturgy and theology in mind, The Rites of Christian Initiation is intended for all?pastors, catechists, RCIA directors, and others?who seek a solid, engaging formation for their ministries today in the ?Blessed Sacrament? of baptism. Chapters are ?The Origins of Christian Initiation? ?Christian Initiation in the Pre-Nicene Period,? ?Initiation in the Christian East During the Fourth and Fifth Centuries,? ?Initiation in the Christian West During the Fourth and Fifth Centuries,? ?Baptismal Preparation and the Origins of Lent? ?Christian Initiation in the Middle Ages,? ?Christian Initiation in the Protestant and Catholic Reforms of the Sixteenth Century,? ?Christian Initiation in the Churches Today,? and ?Back Home to the Font: The Place of Baptismal Spirituality in a Displaced World.??Maxwell Johnson has done an excellent job of taking the bowl of theological-historical-liturgical spaghetti and making it digestible.? Forum on the Catechumenate Newsletter"Together with its companion volume of essays (Living Water, Sealing Spirit), this volume will serve as a comprehensive, readable, and reliable introduction to the study of Christian initiation for a long time to come." Theological Studies?. . . comprehensive, covering ancient, medieval, reformation and the modern periods. . . . The presentation is soundly historical, but sensitive to theological and pastoral issues, and questions of spirituality. . . . Very like the best overall treatment of Christian initiation available.? Kilian McDonnell, President Institute for Ecumenical Research St. John?s University?. . . Maxwell Johnson has equipped readers with all they need . . . in this masterful synthesis of history, liturgy, and spirituality. Readers will find themselves wiser, hopeful, and challenged by the implications of baptism.? Paul Turner?. . . surely destined to be the standard textbook on the subject for very many years to come.? Paul Bradshaw Professor of Liturgy University of Notre Dame?This imposing book has set a high aim for itself: [to describe] the development and theology of the rites of Christian initiation ?from their New Testament origins to their current shape in the Roman Catholic, Episcopal, and Lutheran Churches? (back cover). . . . The book describes, in admirable fashion, the development of an astonishing renewal, its significance both in itself and in regard to the ultimate goal of ecumenical community.? Archiv F r Liturgiewissenschaft