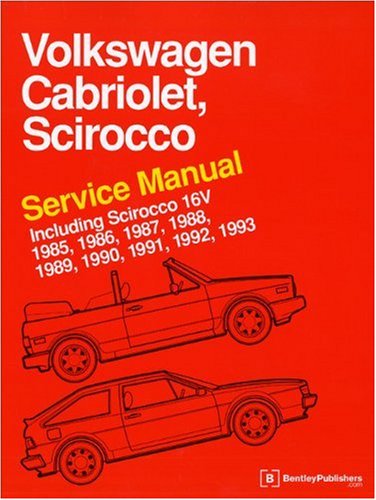 Service to Volkswagen owners is of top priority to the Volkswagen organization and has always included the continuing development and introduction of new and expanded services. This manual has been prepared with the Volkswagen owner in mind. The aim throughout has been simplicity, clarity and completeness, with practical explanations, step-by-step procedures and accurate specifications. Though the do-it-yourself Volkswagen owner will find this manual indispensable as a source of the same detailed maintenance and repair information available at an authorized Volkswagen dealer, the Volkswagen owner who has no intention of working on his or her car will find that reading and owning this manual will make it possible to discuss repairs more intelligently with a professional technician. Includes full manual transaxle rebuilding procedures, Digifant I and II fuel injection troubleshooting and repair (Digifant I On-Board Diagnosis), and Cabriolet power convertible top troubleshooting and repair. Includes special Fundamentals section. This Volkswagen Cabriolet and Scirocco service manual covers the model years 1985, 1986, 1987, 1988, 1989, 1990, 1991, 1992 and 1993, and includes Wolfsburg editions and Scirocco 16V. This manual was created specifically to cover Cabriolet and Scirocco models built for sale in the United States and Canada. 544 pages, 860 illus/diagrams.