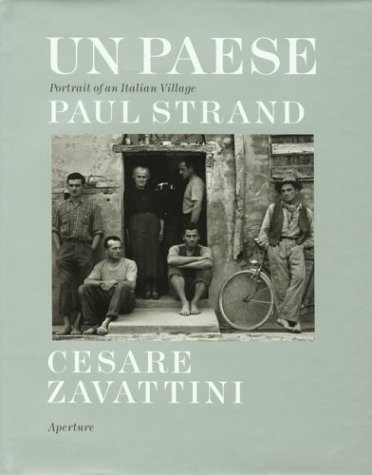 "Wherever I happened to be," wrote Paul Strand, "I sought the signs of a long partnership that give each place its special quality and create the profiles of its people. . . . "

In 1953 the renowned American photographer Paul Strand, who was then living in France, suggested to Italian screenwriter Cesare Zavattini that they do a book together about a small town in Italy, a town that would reveal the spirit of a people. Strand asked Zavattini to choose a village with the elusive "special quality" he sought. Zavattini knew just such a village: his own birthplace of Luzzara, in the Po Valley. The collaboration of these two remarkable artists resulted in the classic book Un Paese.

Published in Italian in 1955, and now available for the first time in the English language, Un Paese captures in photographs and in spoken testimony the essential experience of daily life in Luzzara. It presents a series of intense portraits, graceful landscapes, and images of everyday objects. Paul Strand's photographs are carefully distilled, deeply powerful; they contain the flavors and the rhythms of an entire culture crystallized in a single village. Zavattini successfully synthesizes text and image, aligning with the new cinematic trend of the day, a movement known as Italian neorealism. Their Luzzara is an ordinary village, neither overly picturesque nor greatly unusual, yet it is a town sustained by a grounded humanity and a profound love for the land by its people.

Paul Strand was born in New York City in 1890, and began photographing at the age of eighteen. An acknowledged master of still photography, Strand devoted himself between 1931 and 1944 almost exclusively to filmmaking. In 1945 New York's Musuem of Modern Art devoted its first one-person photography exhibition to his work. Strand received numerous awards during his lifetime, and exhibitions of his work have been among the most important photography exhibitions of the twentieth century. These include the National Gallery's exhibition, "Paul Strand: An American Vision," and the Aperture exhibition, "Paul Strand: The World on My Doorstep," which has traveled internationally. In 1950, Strand and his wife Hazel left New York for Europe, where they remained until his death in France in 1976.

Cesare Zavattini (1902-1983), writer and screenwriter, was one of the most important exponents of the Italian neorealist movement in cinema. Between 1931 and 1943, he helped to define its distinct character, rich in fantasy and surreal humor, in an enormous journalistic and literary body of work--collected in part in the books Parliamo tanto di me (1931), I poveri sono matti (1937), and Totò il buono (1943). He began his career as a screenwriter in 1935 and made his reputation in 1942 with Alessandro Blasetti's Quattro passi fra le nuvole (Four steps in the clouds). In 1943 he began his association with Vittorio de Sica, from which were born such films as Sciuscià (Shoeshine, 1946), Ladri di biciclette (The bicycle thief, 1948), Miracolo a Milano (Miracle in Milan, 1951), and Umberto D. (1952). In 1977, he was awarded the Writers' Guild Medallion by the Association of American Writers.