Articoli correlati a Propaganda and the Public Mind: Conversations With...

Propaganda and the Public Mind: Conversations With Noam Chomsky 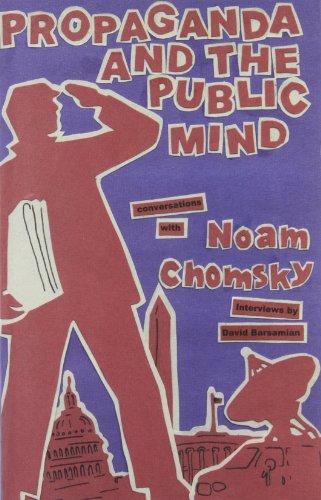 Renowned interviewer David Barsamian showcases his unique access to Chomky’s thinking on a number of topics of contemporary and historical import. In an interview conducted after the important November 1999 “Battle in Seattle,” Chomsky discusses prospects for building a movement to challenge corporate domination of the media, the environment, and even our private lives. Chomsky also engages in a discussion of his ideas on language and mind, making his important linguistic insights accessible to the lay reader.

Noam Chomsky, Institute Professor at the Massachusetts Institute of Technology, is a world-renowned linguist, philosopher, and political analyst. He writes extensively and lectures around the world on international affairs, U.S. foreign policy, and human rights. Chomsky has published 15 books with South End Press, including Rogue States: The Rule of Force in World Affairs. David Barsamian lives in Boulder, Colorado, and is the producer of the award-winning syndicated radio program, Alternative Radio. His interview books with luminaries such as Noam Chomsky, Howard Zinn, and Edward W. Said have sold in the hundreds of thousands of copies.

1. Activist Victories
2. US to World: Get Out of the Way
3. For Reasons of State
4. East Timor on the Brink
5. The Meaning of Seattle
6. Liberating the Mind
7. Solidarity and Mutual Support

"Noam Chomsky is one of the most significant challengers of unjust power and delusions; he goes against every assumption about American altruism and huniatrianism."-Edward Said

"Reading Chomsky is like standing in a wind tunnel. With relentless logic, Chomsky bids us to listen closely to what our leaders tell us--and to discern what they are leaving out...The questions Chomsky raises will eventually have to be answered. Agree with him or not, we lose out by not listening."-Business Week

"David Barsamian is the Studs Terkel of our generation."-Howard Zinn, author of A People's History of the United States

Noam Chomsky is a world renowned linguist and one of America's foremost social critics. He is Institute Professor in the Department of Linguistics and Philosophy at M.I.T. He is the author of numerous books, including Pirates and Emperors Old and New, Fateful Triangle, The New Military Humanism: Lessons from Kosovo and Rogue States: The Rule of Force in World Affairs.