Articoli correlati a The Secret of the Plumed Serpent: Further Conversations...

Torres, Armando The Secret of the Plumed Serpent: Further Conversations with Carlos Castaneda

The Secret of the Plumed Serpent: Further Conversations with Carlos Castaneda 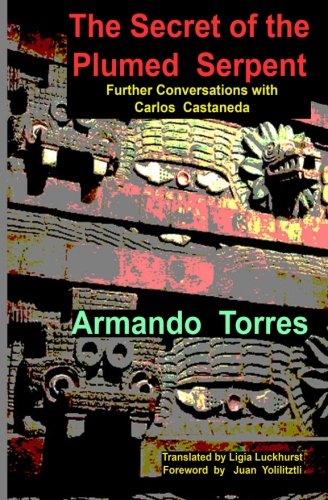 “The Secret of the Plumed Serpent”, the second book of the elusive author and healer Armando Torres follows his bestseller “Encounters with the Nagual”, where he describes his friendship with Carlos Castaneda, the controversial author of twelve best-selling books recounting Castaneda’s apprenticeship with don Juan Matus, a Yaqui sorcerer and custodian of ancestral knowledge that has flourished for thousands of years in what is now Mexico and parts of Central America. Here, eight years later (the original Spanish edition was published in 2010), Torres continues his account of his experiences on the path of sorcerer-healer, the account he began and then abruptly broke off in the last chapter of the “Encounters with the Nagual”. His simple, functional narrative opens an astounding vista of secret ceremonies, solemn incantations and magical beings roaming the otherworld, but also of relentless discipline and of unquenchable passion for absolute freedom his teachers the healers inherited from their ancestors, the Toltecs: masterful sorcerers, artists and men of knowledge dedicated to discovering the secret of existence. It is the secret of Quetzalcoatl, the Plumed Serpent, the gateway to infinity. As Torres works his way towards the final revelation, terror and wonder mingle with moments of earthy comedy, deliciously seasoned with the irony, wit and practical jokes of his friend and mentor Carlos. Somewhere in the anonymity of Mexican countryside, Armando’s quest for freedom and impeccability continues.

Not much is known about Armando Torres. As a student of journalism in Mexico City he used to attend public talks given by Carlos Castaneda, anthropologist and author, about his long apprenticeship with don Juan Matus, a sorcerer-seer he met during his field study of the use of psychotropic plants among the Sonoran Yaquis. Although Castaneda’s training required him to shun close relationships with the uninitiated, Torres became his friend and confidant, as well as the foretold bearer of the Rule of the Three-Pronged Nagual. He described his experiences in his first book, “Encounters with the Nagual: Conversations with Carlos Castaneda”. Remaining elusive, Armando Torres lives and practises with a group of healers-seers at an unknown location in rural Mexico.