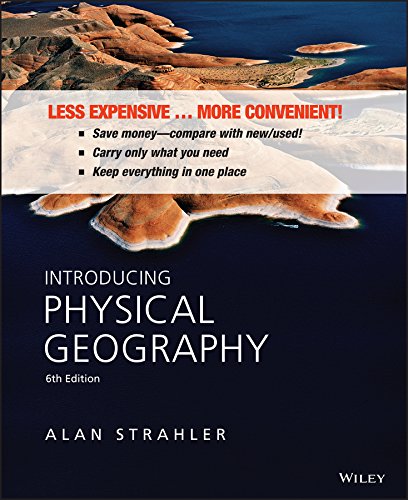 Introducing Physical Geography, 6th Edition is known for its clear writing, distinctive photos and illustrations and a strong supplements program. The text continues its tradition as a great book to help non-science readers visualize and understand earth processes and learn the basic language of physical geography. The new edition features a strengthened "Eye on Global Change" coverage and coverage of the geographers tool box.

Alan Strahler received his B.A. degree in 1964 and his Ph.D. degree in 1969 from the John Hopkins University Department of Geography and Environemtal Engineering. He has held academic positions at the Universikty of Virginia, the Univrsity of California at Santa Barbara, and Hunter College of the City Unviersity of New ork, and is now Professor of Georgraphy at Boston University. With Arthur Strahler, he is coauthor of seven textbook titles with seven revised editions on phyhsical geography and environmental science. He has published over 250 articles in the refereed scientific literature, largely on the theory of remote sensing of vegetation, and has also contributed to the fields of plant geography, forest ecology, and quantitative methods. His work has been supported by over $6 million in grant and contract funds, primarily from NASA. In 1993, he was awarded the Association of American Geographers/Remote Sensing Specialty Group Medal for Outstanding Contributions to Remote Sensing. In 2000, he received the honorary degree Doctorem Scientiarum Honoris Causa (D.H.C) from the Université Catholique de Louvain, Belgium, for his academic accomplishments in teaching and research. Arthur Strahler received his B.A. degree in 1938 from the College of Wooster, Ohio, and his Ph.D. degree in geology from Columbia University in 1944. He was appointed to the Columbia University faculty in 1941, serving as Professor of Geomorphology from 1958 to 1967 and as Chairman of the Department of Geology from 1959 to 1962. He was elected as a Fellow of both the Geological Society of America and the Association of American Geographers for his pioneering contributions to quantitative and dynamicgeomorphology, contained in over 30 major papers in leading scientific journals. He is the author or coauthor with Alan Strahler of 16 textbook titles with 13 revised editions in physical geography, environmental science, the Earth sciences, and geology. His most recent new title, "Plate Tectonics (GeoBooks Publishing, Cambridge, Massachusetts), has received critical praise as an upper-level college text on plate tectonics as the grand paradigm in Earth science.

For decades, the Strahler name has been synonymous with authority, accuracy and cutting-edge scientific research.

The sixth edition of Introducing Physical Geography continues to deliver on these strengths, by showcasing the science that serves as the basis of the discipline, while engaging today's students with enhanced visual instruction and linkages to our planet's changing environment.

FEATURES OF THE NEW EDITION

For information about student and instructor supplements visit
http://www.wiley.com/college/strahler

This title is now available with WileyPLUS

WileyPLUS is an online teaching and learning environment that integrates the entire digital textbook with the most effective instructor and student resources to fit every learning style. WileyPLUS courses in the geosciences give students practice with hands-on activities and assessments such as videos, animations and visualizations. Learn more about WileyPLUS at www.wileyplus.com

Descrizione libro 2013. Loose Leaf. Condizione: New. 0006th. Loose Leaf. Introducing Physical Geography, 6th Edition Binder Ready Version is known for its clear writing, distinctive photos and illustrations and a strong supplements program. The t.Shipping may be from multiple locations in the US or from the UK, depending on stock availability. 656 pages. 1.409. Codice articolo 9781118291931

Descrizione libro 2013. Loose Leaf. Condizione: New. 0006th. Loose Leaf. Introducing Physical Geography, 6th Edition Binder Ready Version is known for its clear writing, distinctive photos and illustrations and a strong supplements p.Shipping may be from our Sydney, NSW warehouse or from our UK or US warehouse, depending on stock availability. 656 pages. 1.409. Codice articolo 9781118291931