Articoli correlati a Leabhar imuinn Volume 2; the book of hymns of the ancient...

Todd, James Henthorn Leabhar imuinn Volume 2; the book of hymns of the ancient church of Ireland

Leabhar imuinn Volume 2; the book of hymns of the ancient church of Ireland 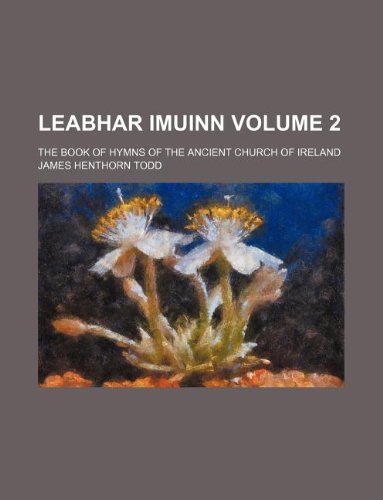 This historic book may have numerous typos and missing text. Purchasers can download a free scanned copy of the original book (without typos) from the publisher. Not indexed. Not illustrated. 1869 Excerpt: ...c. 20. t Half verse.--This seems to mean that there is assonance or rhyme in the middle of every line: as, vetustut, ingenifiu; engine, crcpidinr; secula, in finita, &c. See the corresponding passage in the Preface in the Leabhar Breacc, p. 225, infra. b Of His creatures i. e. as compared with Him. The first stanza relating to God, and the remainder to His creatures, it was fit that the first should consist of a greater number of lines. Now the proper manner of singing this Hymn is, that Quit potest Deot be sung between every two chapters: and it is thus that its grace shall be upon him that sings it, because it was so it was sung at first Now there are many graces upon this Hymn, viz., Angela present whilst it is sung; the Devil shall not know the path of him who sings it every day; and neither shall his enemies perceive him in the day on which he sings it; and, moreover, there shall be no strife in the house in which it is frequently sung. It protects against every kind of death, except death on the pillowi; and there shall be neither hunger nor nakedness in the place where it is frequently sung: et alise multick sunt. The Preface in the Leabhar Breacc, fol. i09 a, differs in some particulars from the foregoing. It is as follows, with a literal translation: Altns prosetor. Columcille fecit hunc hymnum Trinitati per septem annos in cellula nigra, i. in the Black Recles in Deny of Columcille, or as others say, it was composed extemporaneouslyi, viz., at the time when Columcille was at Hy alone, Boethin only excepted. And it was then revealed to Columcille that guests were coming to him, viz., seven of the people of Gregory who came to him from Rome with gift9 for him, viz., the Mrgemmn' great gem of Columcille, that is, a cross, extant this day; and the...