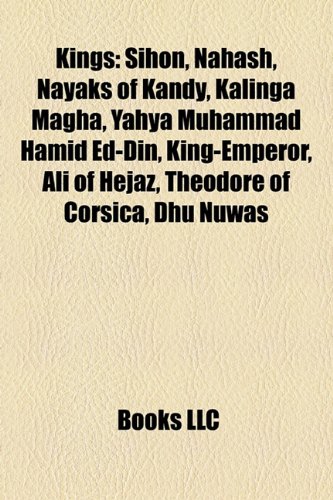 Please note that the content of this book primarily consists of articles available from Wikipedia or other free sources online. Pages: 25. Chapters: Sihon, Nayaks of Kandy, Noah Musingku, Tub'a Abu Kariba As'ad, Kalinga Magha, Prince Frederick Charles of Hesse, Yahya Muhammad Hamid ed-Din, Christ the King, King-Emperor, Ali of Hejaz, King of Bahrain, Dhu Nuwas, Ateas, Zakar-Baal, Ranulf II of Aquitaine, Gabhran Goranus, Ariobarzanes III of Cappadocia, Mesha, Ariobarzanes II of Cappadocia, Lan Kham Deng, Meryey, Shammar Yahri'sh, Idwal ab Meirig, Epulon, Alp Iluetuer, Brak, Ingwenyama Mayitjha III, King Haffon, Mwami, Khamtum, Meunsai, Salvius, Phommathat, Nasten, Nahash, Dev Purush Ghosh, Rabiah ibn Mudhar. Excerpt: The Nayaks of Kandy (a.k.a. Kandy Nayak Dynasty) were the rulers of Sri Lanka with Kandy as their capital from 1739 to 1815. They were also the last dynasty to rule Sri Lanka. They were related to the Madurai Nayak dynasty and to the Tanjore Nayak dynasty . There were four kings of this lineage and the last king, Vikrama Rajasinha, was captured by the British and exiled to Vellore Fort in India Much earlier to the establishment of the Kandy Nayak dynasty, it was not unknown for the Sinhalese to take wives from ruling clans across Southern India . The first to do so was King Vijaya who procured his royal consort from the city of Madurai . Later kings followed suit. Because the Kandy kings received military support from the Nayaks of Madurai and the Tanjore Nayak dynasty to fight off the Portuguese, alliances between Kandy, Madurai and Tanjore were already established. In the 17th and 18th centuries, marital alliances between Kandyan kings and Nayak princesses were a matter of policy . When a Sinhalese Kandyan king, Narendra Sinha, died without an offspring, the brother of his Madurai Nayak queen succeeded the throne in 1739 under the coronated name of Sri Vijaya Raja Sinha . Thus in 1739 the Nayaks came to rule the Kandy kingdom . These Nayak kings co...