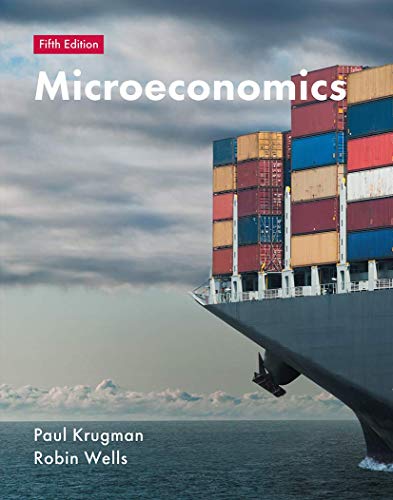 When it comes to explaining fundamental economic principles by drawing on current economic issues and events, there is no one more effective than Nobel laureate and New York Times columnist Paul Krugman and co-author, Robin Wells. In this best-selling introductory textbook, Krugman and Wells' signature storytelling style and uncanny eye for revealing examples help readers understand how economic concepts play out in our world. Microeconomics 5e provides unparalleled coverage of current topics, including sustainability, the economic impact of technology and pressing policy debates. A commitment to broadening students' understanding of the global economy; a global focus is woven throughout with more on the ascendance of China's economy, the Euro and events in Europe (including Brexit), and post-recession economies around the globe.

L'autore:
Paul Krugman, recipient of the 2008 Nobel Memorial Prize in Economic Sciences, taught at Princeton University for 14 years. In 2015, he joined the faculty of the Graduate Center of the City University of New York, associated with the Luxembourg Income Study, which tracks and analyzes income inequality around the world. He received his BA from Yale and his PhD from MIT. Before Princeton, he taught at Yale, Stanford, and MIT. He also spent a year on the staff of the Council of Economic Advisers in 1982 1983. His research has included trailblazing work on international trade, economic geography, and currency crises. In 1991, Krugman received the American Economic Association s John Bates Clark medal. In addition to his teaching and academic research, Krugman writes extensively for nontechnical audiences. He is a regular op-ed columnist for the New York Times. His best-selling trade books include End This Depression Now!, The Return of Depression Economics and the Crisis of 2008, a history of recent economic troubles and their implications for economic policy, and The Conscience of a Liberal, a study of the political economy of economic inequality and its relationship with political polarization from the Gilded Age to the present. His earlier books, Peddling Prosperity and The Age of Diminished Expectations, have become modern classics.