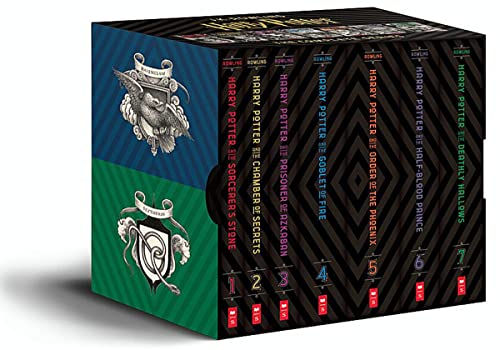 A new special edition boxed set of the complete Harry Potter series, in celebration of the 20th anniversary of the publication of Harry Potter and the Sorcerer's Stone.
This collectible new boxed set contains the complete bestselling Harry Potter series, books 1-7 by J.K. Rowling, brilliantly redesigned by Caldecott Medalist Brian Selznick. A perfect gift to introduce a new reader to this beloved series, as well as a gorgeous addition to any fan's bookshelf.

J.K. Rowling is the author of the record-breaking, multi-award-winning Harry Potter novels. Loved by fans around the world, the series has sold over 500 million copies, been translated into over 80 languages, and made into eight blockbuster films. She has written three companion volumes in aid of charity: Quidditch Through the Ages and Fantastic Beasts and Where to Find Them (in aid of Comic Relief UK and Lumos), and The Tales of Beedle the Bard (in aid of Lumos), as well as a screenplay inspired by Fantastic Beasts and Where to Find Them, which marked the start of a five-film series to be written by the author. She has also collaborated on a stage play, Harry Potter and the Cursed Child Parts One and Two, which opened in London’s West End in the summer of 2016 and on Broadway in the spring of 2018. In 2012 J.K. Rowling’s digital company Pottermore was launched, where fans can enjoy news, features, and articles, as well as original content from J.K. Rowling. She is also the author of The Casual Vacancy, a novel for adult readers, and the Strike crime series, written under the pseudonym Robert Galbraith. She has received many awards and honors, including an OBE and Companion of Honour, France’s Légion d’honneur, and the Hans Christian Andersen Award.

Brian Selznick’s books have garnered countless accolades worldwide, and have been translated into more than 35 languages. He is the Caldecott Medal-winning creator of the #1 New York Times bestsellers The Invention of Hugo Cabret, adapted into Martin Scorsese’s Oscar-winning movie Hugo; and Wonderstruck, adapted into the eponymous movie by celebrated filmmaker Todd Haynes, with a screenplay by Selznick; as well as the New York Times bestsellers The Marvels and Baby Monkey, Private Eye. Most recently, he illustrated the 20th anniversary paperback edition covers of J.K. Rowling’s Harry Potter series.
Mary GrandPré has illustrated more than twenty beautiful books, including The Noisy Paint Box by Barb Rosenstock, which received a Caldecott Honor; Cleonardo, the Little Inventor, of which she is also the author; and the original American editions of all seven Harry Potter novels. Her work has also appeared in the New Yorker, the Atlantic Monthly, and the Wall Street Journal, and her paintings and pastels have been shown in galleries across the United States. Ms. GrandPré lives in Sarasota, Florida, with her family.

Descrizione libro No Binding. Condizione: New. This beautiful promotional poster for the Harry Potter series was created by multi-award-winning artist Brian Selznick on the occasion of the 20th anniversary of the first volume of the internationally bestselling and beloved books. The poster is 11 inches high by 36 inches wide, folded into four sections (please see my attached photos), suitable for framing. Codice articolo DR450