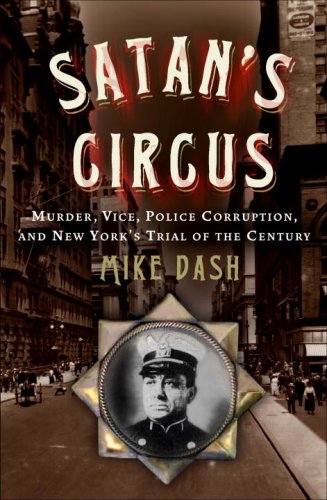 A meticulously detailed chronicle of corruption, intrigue, and crime documents the life and times of NYPD officer Charley Becker, his involvement in the graft and corruption that was the norm in midtown Manhattan's Satan's Circus region, and his arrest, trial, conviction, and execution for the killing of a casino owner who threatened to expose him. 50,000 first printing.

"Satan's Circus is the intriguing, tragic story of New York's most notorious- and most misunderstood- crime scandals. Mike Dash has provided a terrific, lively narrative of one of the city's most colorful eras."
-Kevin Baker, bestselling author of Strivers Row

“High-level corruption, betrayals, political shenanigans, a spectacular murder case, a gruesome execution, and a voyage through one of New York's most exotic demimonde cycles. These are just some of the ingredients Dash injects into an engrossing tale that still reverberates today.”
-Selwyn Raab, New York Times bestselling author of Five Families

"Combining history and entertainment, Satan’s Circus is a fascinating read. Mike Dash artfully describes a grimy Gotham from a century ago with its swarming bars, corrupt pols, and one-of-a-kind underworld forces that sent police lieutenant Charley Becker to the electric chair. Be forewarned, once you pick up Satan's Circus you won't be able to put it down."
—Thomas Kelly, author of Empire Rising and The Rackets

Mike Dash is the New York Times bestselling author of Tulipomania and Batavia’s Graveyard. He read history at the University of Cambridge and worked for some years as a magazine publisher before becoming a full-time writer. Dash lives with his wife and daughter in London, where he researches in the British Library and writes regularly for the English national press