Articoli correlati a The Engineers Of Victory

Kennedy, Paul The Engineers Of Victory

The Engineers Of Victory 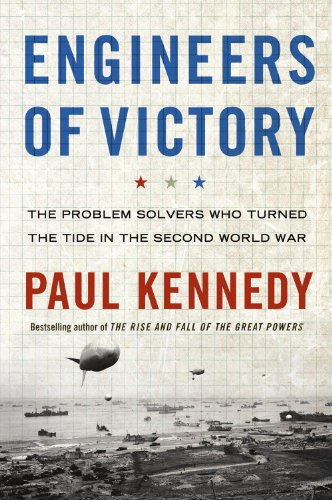 In January 1943, FDR and Churchill established the Allied objectives for the war: to defeat the Nazi Blitzkrieg; to control the Atlantic sea lanes and the air over western and central Europe; to take the fight to the European mainland; and to end Japan’s imperialism. Astonishingly, a little over a year later, these ambitious goals had nearly all been accomplished. With riveting, tactical detail, The Engineers of Victory reveals how.

Paul Kennedy uncovers how the leaders’ grand strategy was practically achieved by the ordinary soldiers, scientists, engineers and businessmen responsible for realizing their commanders’ visions of success. Revealing exactly how thousands of individual Allied planes and fighting ships were choreographed to collectively pull off the invasion of Normandy, Kennedy illuminates how crew chiefs perfected the high-flying and inaccessible B-29 Superfortress that would drop the atomic bombs on Japan.

In The Engineers of Victory, Kennedy unearths the real heroes of the war, highlighting for the first time the creative strategies, tactics and organizational decisions that turned the lofty Allied objectives into a successful reality.

PAUL KENNEDY is Dilworth professor of history and director of international security studies at Yale University. He is the author and editor of fourteen books, including The Rise and Fall of the Great Powers, which has been translated into more than twenty languages and was named by The Times Literary Supplement as one of the 100 Most Influential Books since the Second World War. Professor Kennedy lives in Connecticut.

1. The Engineers Of Victory

2. The Engineers Of Victory

Descrizione libro HarperCollins Publishers, 2013. Paperback. Condizione: Good. A+ Customer service! Satisfaction Guaranteed! Book is in Used-Good condition. Pages and cover are clean and intact. Used items may not include supplementary materials such as CDs or access codes. May show signs of minor shelf wear and contain limited notes and highlighting. Codice articolo 1554683068-2-4