Articoli correlati a Unpunished: A Mystery 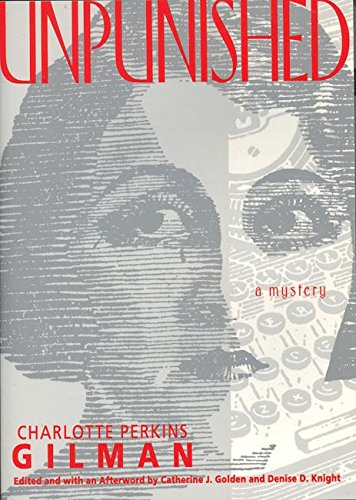 Written in the late 1920s and never before published, this mystery by the author of such early feminist classics as The Yellow Wall-Paper is a major literary find. Gilman's first and only detective novel recounts the murder of a pernicious attorney who has been shot, stabbed, bludgeoned, strangled, and poisoned. Unpunished's husband-and-wife detective team present a model of true partnership, while the unfolding details of the case offer poignant evidence of the injustice that poor and powerless women can suffer at the hands of a brutal man. Gilman weaves her case for women's freedom and empowerment into a mystery rich in twists and turns, colorful characters, red herrings, suspense and wry humor.

"Sure to delight mystery lovers and anyone interested in the history of early feminism. . . . Gilman weaves [her] overt political message into the story with wit and verve. . . . The book’s surprising ending, fast-paced action and endearing detectives make it far more than a valuable historical artifact; it’s a smart, entertaining whodunit by a writer who understood (and clearly enjoyed) the genre, even as she put it to polemical use." Publishers Weekly

"Gilman was way ahead of her time . . . paving the way for contemporary heroines like Sara Paretsky’s V. I. Warshawski and Sue Grafton’s Kinsey Milhone." Seattle Weekly

"A feminist gem from the Golden Age of detective fiction . . . [Unpunished] is funny and smart and cleverly plotted, right down to the twist ending." The Globe and Mail (Toronto)

Charlotte Perkins Gilman (1860-1935) was a feminist writer, lecturer, and activist, and is best known for The Yellow Wall-Paper. Her many other works include the science fiction trilogy Herland and Women and Economics.