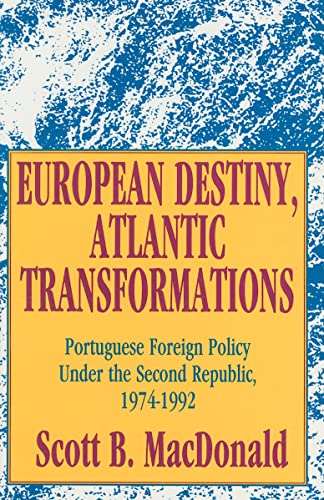 With the fall of its centuries-old empire in 1974-1975, Portugal embarked on a transitional period that reconciled a long tradition of acting out national interests overseas with the need to integrate itself into Western Europe. The result has been a deemphasis on various Atlantic and colonial linkages and the forging of a new and highly successful European identity within the framework of the European Community. In European Destiny, Atlantic Transformations Scott B. MacDonald offers a comprehensive analysis of Portugal's foreign policy and its highly successful venture in economic and political transformation.Although Portugal is firm in its committment to a European destiny, it has not turned its back on relations with the United States and its former colonies hi Africa and Asia. MacDonald traces the evolution of U.S.-Portuguese cooperation along economic, cultural, and military lines and shows how NATO has played a pivotal role in the process. This was most recently underscored when the U.S. made extensive use of the Azores during the Gulf War against Iraq. Likewise, in its ties with the Lusophone countries formerly under its control - Cape Verde, Guinea-Bissau, S - o Tom" and Princip" - Portugal has sought to improve political relations and act as a peacemaker in regional conflicts such as those in East Timor, Angola, and Mozambique.The scope of MacDonald's work takes in issues posed to Portugal by new foreign policy concerns that range from the breakup of the Soviet Union to the rise of Islamic fundamentalism in North Africa and the Middle East. He points out that in a world of rapidly shifting political and economic alignments, Portugal provides a representative model of a relatively small nation that has undergone succesful economic reform while deepening its committment to its new democratic system. As such, the Portuguese model is instructive for newly emerging democracies of Eastern Europe and Latin America. European Destiny, Atlantic Transformations is an important addition to the literature on post-Cold War politics. It will be read by historians, economists, and foreign policy specialists.