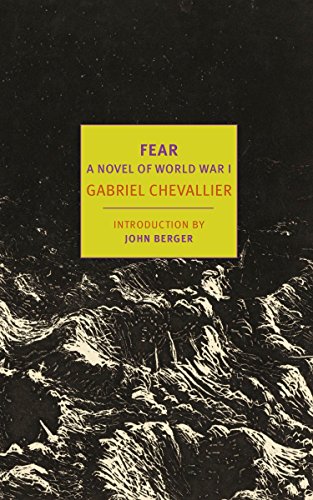 Winner of the Scott Moncrieff Prize for Translation

1915: Jean Dartemont heads off to the Great War, an eager conscript. The only thing he fears is missing the action. Soon, however, the vaunted “war to end all wars” seems like a war that will never end: whether mired in the trenches or going over the top, Jean finds himself caught in the midst of an unimaginable, unceasing slaughter. After he is wounded, he returns from the front to discover a world where no one knows or wants to know any of this. Both the public and the authorities go on talking about heroes—and sending more men to their graves. But Jean refuses to keep silent. He will speak the forbidden word. He will tell them about fear.

John Berger has called Fear “a book of the utmost urgency and relevance.” A literary masterpiece, it is also an essential and unforgettable reckoning with the terrible war that gave birth to a century of war.

"Fear hardly feels like an object from the lost-and-found, which is why it has preserved its capacity to gobsmack. Chevallier’s protagonist, Jean Dartemont, a sardonic 19-year-old student from Paris shoved into a uniform and rushed to the trenches, narrates the war with a bracingly modern sensibility. He is confessional, self-deprecatory, and a little bit vulgar. There’s a strong streak of Joseph Heller in his Erich Maria Remarque." —Franklin Foer, The New Republic

“All the phases of this particularly horrid war, phases that we have become accustomed to from later writing, are recounted here in a remarkable voice...And, in this prizewinning translation by Malcolm Imrie, his writing still has a ferocious power...Chevallier’s narrative remains radioactive with pure terror, frightening in a way later accounts don’t quite manage. It’s hard to believe, given the powerful, almost American casualness of his voice, that this is its first American appearance. His tone is so inveigling and so amiable as he inducts us like witnesses into that great European madness with which the past century began, decades before most who will read this translation were born. It’s also hard to believe, once we’re deeply engaged with the book, that Chevallier is dealing with events that are nearly a hundred years in the past, deploying prose that’s almost as old. We are lucky his voice came through.” —Thomas Keneally, The New York Times Book Review

"Chevallier’s book...represents that rarest of war narratives—one that is indispensable, nearly unprecedented, and painfully relevant....What makes Chevallier’s book a masterpiece is the lucidity of the author’s eyewitness account; its prose moves from practical concerns like picking lice to poetic reverie in the space of a paragraph, capturing the chaos of war and the stillness of the battlefield, revealing a terrible beauty." —Publishers Weekly starred review

"A chronological burst of battle stories and vindictive reflections on the paradox of war, Fear  is structurally similar to Ernst Jünger's Storm of Steel, while readers of Céline (a contemporary of Chevallier's) will catch whiffs of the sardonic misanthropy that runs through Journey to the End of Night. Dartemont deconstructs the notions of duty and heroism and draws their origins in fear and ignorance while letting us rifle through his blood-stained sketchbook with images from a war that grws ever more distant in our memories." —Booklist

"Its first-person narration by a young soldier who, like the author, was wounded in battle, hospitalized, returned to the front and remained an infantryman until the armistice reads like a cross between the darkest humor and the bleakest reportage....the themes of what [Chevallier] calls “this anti-war book” are timeless: the folly of nationalism, the foolish pomposity of military leaders, the arbitrariness of death, the madness of war." —Kirkus Reviews

“Reading Fear feels like being led through the damnation panel of Bosch’s The Garden of Earthly Delights, the front line ‘blazing like some infernal factory where monstrous crucibles melted human flesh into a bloody lava.’ Fear remains a bravura work, fearless from start to finish, pitiless in its targets, passionate in its empathy.” —Neil Fitzgerald, TLS

“Gabriel Chevallier’s autobiographical novel about serving in the bombed-out trenches of World War I still chills the blood. In indelible passages it describes the sensory degradation of war on the human body. Translated into English by Malcolm Imrie without a hint of stiltedness, Chevallier’s long-neglected novel is one of the most effective indictments of war ever written.” —Tobias Grey, The Wall Street Journal

“If Fear has an English equivalent it is The Middle Parts of Fortune by Frederic Manning or, in German, Storm of Steel by Ernst Jünger, each of which give a view of the war from the perspective of lowly infantrymen, and both of whom, like Chevallier, remain stoutly immune to the old lie that dulce et decorum est pro patria mori.” —The Sunday Telegraph

“Gabriel Chevallier, best known for his magnificent novel Clochemerle, has used his experiences during World War I to produce a work of great intensity, comparable to such great literary masterpieces of the period as Henri Barbusse’s Under Fire.” —The Daily Mail

“The most beautiful book ever written on the tragic events that blood-stained Europe for nearly five years.” —Le Libertaire

"Gabriel Chevallier’s unsentimental 1930 novel ... stands in angry denunciation of any presumed heroism in himself or his fellows...This is what has become of jaunty young fools who marched off to war dreaming of adventure and conquest, of tasting exotic foods and women. Faced with the enormity of this cruel joke, laughter and tears merge in one prolonged cri de coeur as Chevallier’s relentless narrative charges headlong through hell." —David Wright, Seattle Times

Gabriel Chevallier (1895–1969) was the son of a notary clerk and lived in Lyon for most of his life. He was called up at the start of World War I and wounded a year later. Returning to the front, he spent the remainder of the war as an infantryman, and was ultimately awarded the Croix de Guerre and named Chevalier de la Légion d’Honneur. He began writing Fear in 1925 but did not publish it until 1930, a year after his first novel, Durand: voyageur de commerce, was released. Fear was suppressed during World War II and not made available again until 1951, by which time Chevallier had earned international fame for his Clochemerle (1934), a comedy of provincial French manners of the Beaujolais region that sold several million copies. In all Chevallier would write twenty-one novels, including several more set in the fictional village of Clochemerle.

John Berger is the author of numerous works of fiction and nonfiction, including To the Wedding, the Into Their Labours trilogy, About Looking, Ways of Seeing, and G., for which he won the Booker Prize. His most recent book is Understanding a Photograph, a collection of his writings about photography, edited by Geoff Dyer. He lives in a small rural community in France.

Malcolm Imrie’s translations from the French include Guy Debord’s Comments on the Society of the Spectacle and José Pierre’s Investigating Sex: Surrealist Discussions 1928–1932. His translation of Gabriel Chevallier’s Fear won the Scott Moncrieff Prize, the most prestigious award for a French-to-English translation.

Descrizione libro Paperback. Condizione: New. Paperback. Shipping may be from multiple locations in the US or from the UK, depending on stock availability. 305 pages. 0.421. Codice articolo 9781590177167