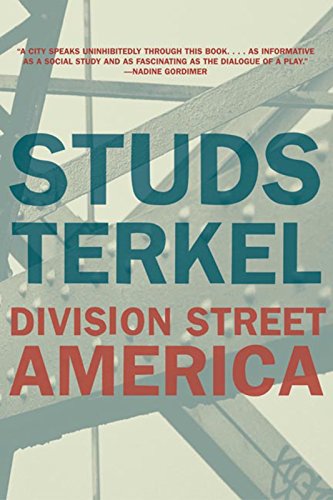 Division Street, Studs Terkel’s first book of oral history, established his reputation as America’s foremost oral historian and as “one of those rare thinkers who is actually willing to go out and talk to the incredible people of this country” (in the words of Tom Wolfe).

Viewing the inhabitants of a single city, Chicago, as a microcosm of the nation at large, Division Street chronicles the thoughts and feelings of some seventy people from widely varying backgrounds in terms of class, race, and personal history. From a mother and son who migrated from Appalachia to a Native American boilerman, from a streetwise ex–gang leader to a liberal police officer, from the poorest African Americans to the richest socialites, these unique and often intimate first-person accounts form a multifaceted collage that defies any simple stereotype of America.

As Terkel himself put it: “I was on the prowl for a cross–section of urban thought, using no one method or technique. . . I guess I was seeking some balance in the wildlife of the city as Rachel Carson sought it in nature. Revealing aspects of people’s lives that are normally invisible to most of us, Division Street is a fascinating survey of a city, and a society, at a pivotal moment of the twentieth century.

Reports not only multitudes divided, but the division in ourselves . . . as exciting as a good novel.” &mdashNelson Algren

A cross-section of all that is contained in humanity.” Chicago Tribune

Studs Terkel (1912–2008) was an award-winning author and radio broadcaster. He is the author of Race: How Blacks and Whites Think and Feel About the American Obsession; Division Street: America, Coming of Age: Growing Up in the Twentieth Century; Talking to Myself: A Memoir of My Times; “The Good War”: An Oral History of World War II; Working: People Talk About What They Do All Day and How They Feel About What They Do; The Studs Terkel Reader: My American Century; American Dreams: Lost and Found; The Studs Terkel Interviews: Film and Theater; Hard Times: An Oral History of the Great Depression; Will the Circle Be Unbroken?: Reflections on Death, Rebirth, and Hunger for a Faith; Giants of Jazz; Hope Dies Last: Keeping the Faith in Troubled Times; And They All Sang: Adventures of an Eclectic Disc Jockey; Touch and Go: A Memoir; P.S.: Further Thoughts from a Lifetime of Listening; and Studs Terkel’s Chicago, all published by The New Press. He was a member of the Academy of Arts and Letters and a recipient of a Presidential National Humanities Medal, the National Book Foundation Medal for Distinguished Contribution to American Letters, a George Polk Career Award, and the National Book Critics Circle 2003 Ivan Sandrof Lifetime Achievement Award.