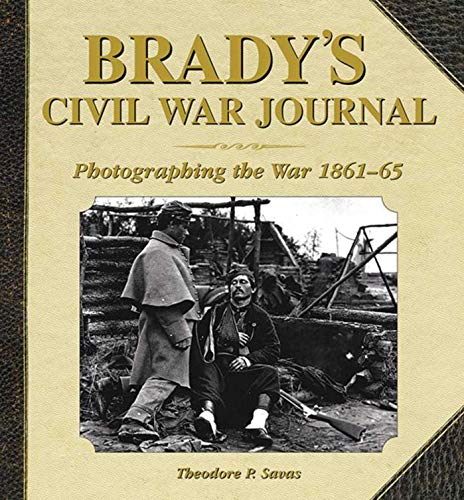 “My greatest aim has been to advance the art of photography and to make it what I think I have, a great and truthful medium of history.” —Mathew Brady

Mathew Brady and his team of assistants risked their lives to capture up-close images of the fury of the American Civil War and its aftermath. Brady actually got so close to the action during the First Battle of Bull Run that he only narrowly avoided capture. Brady's Civil War Journal chronicles the events of the war by showcasing a selection of Brady's moving, one-of-a-kind images and describing each in terms of its significance.

Brady’s team not only captured thousands of portraits of the combatants, the generals, the fighting men, the sick, the dead, and the dying, but also documented the infrastructure of the war machine itself, recording images of artillery pieces, the early railroads, and extraordinary engineering feats.

The text by Theodore P. Savas, an expert on the Civil War, adds context to Brady's memorable photographs, creating an unrivaled visual account of the most costly conflict in American history as it unfolded. His unique record of the war gives modern readers a fascinating insight into the terrible maelstrom that shaped our nation.

A groundbreaking photographic journey that redefined the concept of war journalism.

Theodore P. Savas graduated with honors from the University of Iowa College of Law in 1986 and practiced law in Silicon Valley for twelve years. In addition to teaching legal, history, and business college classes since 1992, he is the author, coauthor, or editor of more than a dozen books (published in six languages) including The Campaign for Atlanta & Sherman's March to the Sea (with David Woodbury), and A Guide to the Battles of the American Revolution (with J. David Dameron), as well as a score of articles in a variety of journals and magazines. He is currently the managing director of Savas Beatie LLC, an independent publishing house.