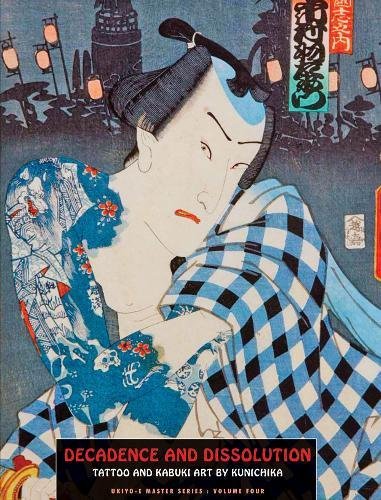 Toyohara Kunichika (1835-1900) was one of the last great masters of ukiyo-e, the Japanese art of woodblock-printing which peaked in the late Edo and early Meiji periods. Inspired by the plays, actors and customs of kabuki theatre, and using vibrant new chemical dyes imported from Europe, Kunichika created a visually dazzling pictorial record of this long-lost, decadent underworld of old Edo. As well as creating "mirrors" of popular productions and stars, he also cast the most dynamic actors of his time in the roles of tattooed robbers, samurai, female bandits and other elements from society's fringes, immortalising them in dozens of intense and intricate print series and tableaux. Even as ukiyo-e came under threat from the emergence of new imaging technologies, Kunichika remained true to his art until the very end of the 19th century.DECADENCE AND DISSOLUTION — edited by Jack Hunter (who also edited the ground-breaking extreme ukiyo-e anthology "Dream Spectres") — collects over 150 of Kunichika's most striking and innovative designs from kabuki theatre, presented in large-format and full-colour throughout. Many have never been published before, even in Japan. Extensive sections on tattoo pictures, single-sheet actor portraits and wide-screen triptychs are augmented by a foreword and a listing of Kunichika's most important series.Fourth in a dynamic new series presenting the cutting edge of 19th century Japanese art.