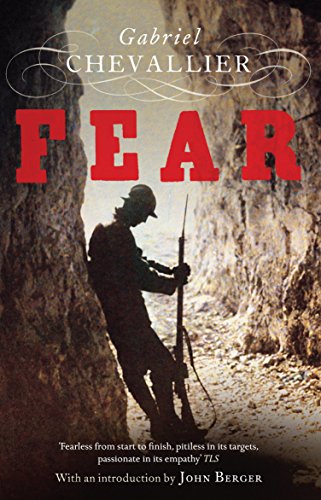 It is 1915. Jean Dartemont is just a young man. He is not a rebel, but neither is he awed by authority and when he's called up and given only the most rudimentary training, he refuses to follow his platoon. Instead, he is sent to Artois, where he experiences the relentless death and violence of the trenches. His reprieve finally comes when he is wounded, evacuated and hospitalised. The nurses consider it their duty to stimulate the soldiers' fighting spirit, and so ask Jean what he did at the front. His reply? 'I was afraid.' First published in France in 1930, Fear is both graphic and clear-eyed in its depiction of the terrible experiences of soldiers during the First World War.

Gabriel Chevallier, best known for his magnificent novel Clochemerle, has used his experiences during World War I to produce a work of great intensity, comparable to such great literary masterpieces of the period as Henri Barbusse's Under Fire (Daily Mail)

Chevallier's pen is as sharp as a bayonet in exposing the arrogance and stupidity of commanding officers ... The power of the novel is increased by deft variations of pace ... There are eloquent soliloquies on nationalism and individual liberty, and impassioned arguments on the nature of war and its effects on those who wage it, by the only men truly qualified to speak of them ... Fear is being billed as a French All Quiet on the Western Front, and in this fine translation by Malcolm Imrie it is a fair claim (Gavin Bell Herald)

The most beautiful book ever written on the tragic events that blood-stained Europe for nearly five years ... a classic (Le Libertaire)

All the horrors of war are there, but atrocity alone would not be enough to explain the grandeur of this text. It is the healthy defiance and controlled anger which earned the book its stripes (Le Figaro)

It is the fear of the condemned man that is described here: fear that sometimes paralyses and sometimes excites by separating strength from courage. These pages which would have had the author shot during the war, we read them with amazement brought on by their complete honesty (Le Soir)

What Chevallier wanted to write with Fear is a straightforward, honest book, from which all artifice is absent; a work that gives the reader the exact measure of war. Chevallier has had the courage to strip war of all its prestige by admitting: I was frightened (Liberté)

A bravura work, fearless from start to finish, pitiless in its targets, passionate in its empathy (TLS)

A rediscovered - and controversial - classic of war literature

Descrizione libro Condizione: Good. The item shows wear from consistent use, but it remains in good condition and works perfectly. All pages and cover are intact (including the dust cover, if applicable). Spine may show signs of wear. Pages may include limited notes and highlighting. May NOT include discs, access code or other supplemental materials. Codice articolo 31UIGP001HV8_ns

Descrizione libro Serpent's Tail, 2012. Paperback. Condizione: GOOD. Has little wear to the cover and pages. Contains some markings such as highlighting and writing. Codice articolo 1846687276_abe_gd

Descrizione libro Serpent's Tail, 2012. Condizione: Good. A+ Customer service! Satisfaction Guaranteed! Book is in Used-Good condition. Pages and cover are clean and intact. Used items may not include supplementary materials such as CDs or access codes. May show signs of minor shelf wear and contain limited notes and highlighting. Codice articolo 1846687276-2-4

Descrizione libro Serpent's Tail, 2012. Condizione: Good. This is an ex-library book and may have the usual library/used-book markings inside.This book has soft covers. In good all round condition. Please note the Image in this listing is a stock photo and may not match the covers of the actual item,300grams, ISBN:9781846687273. Codice articolo 7836573