Articoli correlati a Gertrude and Alice 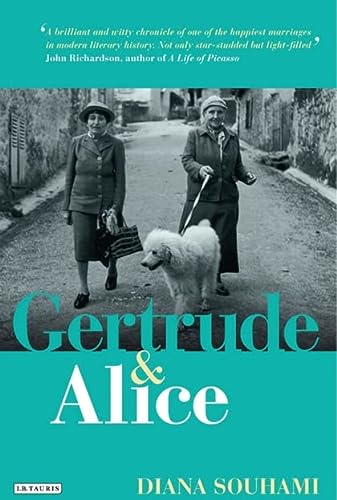 Gertrude Stein and Alice Babette Toklas met on Sunday 8 September 1907, in Paris. From that day on they were together, until Gertrude's death on Saturday 27 July 1946. Everyone who was anyone went to their salons at the rue de Fleurus. They became a legendary couple, photographed by Stieglitz, Man Ray & Cecil Beaton, painted by Picasso and written about in the works of Hemingway, Paul Bowles and Sylvia Beach. "Gertrude and Alice", now with a new foreword, is the highly acclaimed story of their remarkable life together, of the paths that led them to each other, and of Alice's years of widowhood after Gertrude had died. From letters, memoirs and the published writings of Stein and Toklas and with rich illustrations, Whitbread Award-winner Diana Souhami brings their characters, beliefs and achievements vividly to life: 'so emphatically and uncompromisingly themselves, that the world could do nothing less than accept them as they were'.

'A brilliant and witty chronicle of one of the happiest marriages in modern literary history. Not only star-studded but light-filled.' --John Richardson, author of 'A Life of Picasso'

'Wonderfully entertaining ... not many biographies can make you laugh out loud. A real treat' --Time Out

Diana Souhami's acclaimed books include 'Coconut Chaos' (2007), 'Selkirk's Island' (2001 Whitbread Biography Award), 'The Trials of Radclyffe Hall' (shortlisted for the James Tait Black Prize for Biography, winner of the US Lambda Literary Award), 'Mrs Keppel and Her Daughter', 'Greta and Cecil', and 'Gluck: Her Biography'. She lives in London.