Articoli correlati a Culture Of Complaint 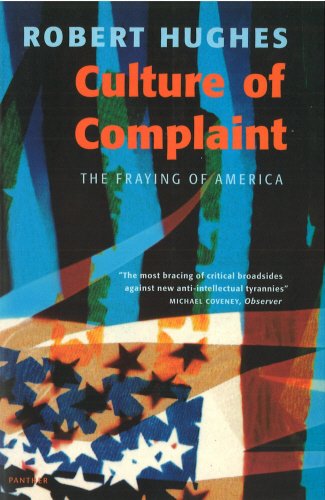 Robert Hughes dismantles and inspects the core elements of the contemporary American ethos. To the left, he skewers Political Correctness, Afrocentrism and academic obsession with theory. To the right, he fires broadsides at free market capitalism. A lucid and invigorating diagnosis of a nation at odds with itself.

Robert Hughes, art critic of Time magazine and twice winner of the American College Art Association's F.J. Mather Award for distinguished criticism, is author of The Shock of the New, of Heaven and Hell in Western Art, and of the history of the transportation of convicts to Australia, The Fatal Shore. This was described by the Washington Post as "popular history in the best sense". It won the W.H. Smith Literary Award, the Duff Cooper Memorial Prize and the Melbourne Age Prize.

His most recent volume of criticism, a selection of essays on art and artists, Nothing if not Critical, was in the words of William Boyd, "criticism at its most intelligent and impressive, trenchant, lucid, elegantly written". His book on Barcelona, a stimulating survey of Catalan culture, was published to enormous acclaim and won the City of Barcelona's own El Brusi Prize. More recently Harvill has published Hughe's American Visions, a book accompanying a television programme on the development of American art.

Robert Hughes was awarded the Order of Australia in recognition of his literary achievements.

1. Culture of Complaint: The Fraying of America

Descrizione libro Harvill Pr, 1999. Paperback. Condizione: Good. Connecting readers with great books since 1972. Used books may not include companion materials, some shelf wear, may contain highlighting/notes, may not include cdrom or access codes. Customer service is our top priority!. Codice articolo S_279663037

Descrizione libro - -, 1999. Paperback. Condizione: Very Good. Shipped within 24 hours from our UK warehouse. Clean, undamaged book with no damage to pages and minimal wear to the cover. Spine still tight, in very good condition. Remember if you are not happy, you are covered by our 100% money back guarantee. Codice articolo 6545-9781860466373

3. Culture of Complaint: The Fraying of America

Descrizione libro Harvill Pr, 1999. Condizione: Good. A+ Customer service! Satisfaction Guaranteed! Book is in Used-Good condition. Pages and cover are clean and intact. Used items may not include supplementary materials such as CDs or access codes. May show signs of minor shelf wear and contain limited notes and highlighting. Codice articolo 1860466370-2-4

Descrizione libro Harvill P., 1999. Paperback. Condizione: Good. A slight tan to page edges Good condition is defined as: a copy that has been read but remains in clean condition. All of the pages are intact and the cover is intact and the spine may show signs of wear. The book may have minor markings which are not specifically mentioned. Most items will be dispatched the same or the next working day. Codice articolo wbb0016819607

Descrizione libro -, 1999. Paperback. Condizione: Very Good. Culture Of Complaint: Fraying of America (Panther S.) This book is in very good condition and will be shipped within 24 hours of ordering. The cover may have some limited signs of wear but the pages are clean, intact and the spine remains undamaged. This book has clearly been well maintained and looked after thus far. Money back guarantee if you are not satisfied. See all our books here, order more than 1 book and get discounted shipping. Codice articolo 7719-9781860466373

6. Culture of Complaint: The Fraying of America

7. Culture of Complaint: The Fraying of America (Panther)

8. Culture of Complaint: The Fraying of America Hughes, Robert