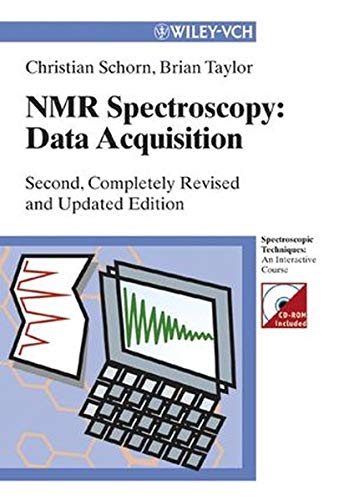 The key to correct structure analysis now in its second edition.
There have been many important advances in the field since the first publication of this book. Consequently, this edition has been extended to incorporate a number of pulse sequence developments. Nevertheless, it still details the basic experiments on a step-by-step basis, such that students and newcomers may come to understand basic data acquisition procedures, modular pulse sequence units, and complete sequences in NMR spectroscopy. The author applies the numerous possibilities of Bruker's simulation program NMR-SIM to provide a guided introduction to the world of pulse sequences. The effectiveness of particular NMR experiments is demonstrated by the "Check Its" section and that of data processing by the accompanying CD-ROM containing the Bruker processing software 1D and 2D WIN-NMR.
Major revisions include increased coverage of simulations of multiple offset selective pulse experiments as well as filter elements. One new chapter is a collection of some of the latest published ideas to improve existing sequences, together with spin-state selective experiments.
The result is a volume encouraging beginners to use high resolution NMR, while prompting experts to evaluate new experiments using the easy-manageable simulation program.

From the first edition:

"... not only of interest for the NMR operators but also for interpreters of spectral data?. Many mistakes made with the application of modern NMR spectroscopy because of a lack of understanding of basic principles may be avoided. This volume covers all these aspects and explains them in an interactive way." AFS Advances in Food Science, 2002, Vol. 24

Christian Schorn is Principal Investigator for GlaxoSmithKline Research & Development Limited, Tonbridge, UK. He studied Chemistry at the Universität zu Köln, Germany, and made his diploma thesis in Chemical Engineering in the central research department of the Bayer AG, Leverkusen. His PhD thesis at the Universität zu Köln included preparative work and structural investigation using 19F NMR spectroscopy. For a post-doctoral stay he went to the Universität Bern, Switzerland, where he worked on pulse program development and structural characterization in the NMR service lab of Peter Bigler. During his stay he started the first edition of the present compendium. The work was finished during his post-doctoral fellowship at the ETH Zürich, Switzerland, where he worked with Nobel Prize winner Kurt Wüthrich on mammalian prion protein structures.

Descrizione libro Condizione: New. Brand New Original US Edition.We Ship to PO BOX Address also. EXPEDITED shipping option also available for faster delivery.This item may ship from the US or other locations in India depending on your location and availability. Codice articolo ABBUN-129708