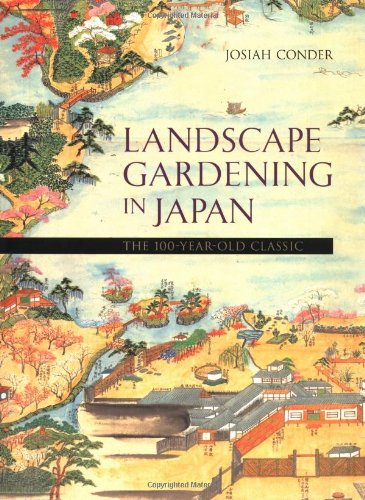 Landscape Gardening in Japan was first published in 1893 by Josiah Conder, a British architect, urban planner, and teacher, who had come to Japan in 1877 to serve as a professor of architecture at the forerunner of Tokyo University and as a consultant to the Ministry of Engineering.
A man of wide interests, Conder was encouraged by the warm reception given his 1891 Flowers of Japan and the Art of Floral Arrangement to undertake a book on gardening. In preparing the present book, he relied not entirely on his own observations but consulted, and "freely borrowed from," some of the most reliable Japanese sources available at the time, the oldest dating to 1633. The resulting book is the product of a Western, Victorian perspective with access to Japanese authoritative texts.
Conder's study of the Japanese landscape garden led him to conclude that it represented universal qualities that could be applied to gardening anywhere. In addition to a discussion of these broader truths, the book is so finely detailed and so richly illustrated that it still serves today as a guide to modern garden-lovers, whether of a practical or a theoretical bent. The present volume combines the original study with an additional volume of photographs of famous gardens that was published shortly thereafter and entitled Supplement to Landscape Gardening in Japan. The interior of the book has been redesigned and the text newly set for easier reading and viewing.
The book has a new Foreword by Azby Brown and an Afterword by Terunobu Fujimori, providing background information on Conder and putting his accomplishments into perspective.
Jacket Illustration: Yokuon-en Zenzu (detail), National Diet Library. The Yokuon-en garden and villa was constructed by Matsudaira Sadanobu around 1794. (See Conder's description in Chapter 1 under Yoku-on-En.) The present illustration is a copy of an original bird's-eye view commemoratively painted in 1842 after the garden's destruction by fire in 1829.

JOSIAH CONDER (1852-1920), a graduate of the Royal Institute of Architects, came to Japan at the age of twenty-four to play a role in the modernization of the emerging Japanese state. He served concurrently as a professor of architecture and a consultant to the Japanese government. Between 1878 and 1907 he designed over 50 major buildings in the Tokyo area, which served as models to the rapidly industrializing nation. His name is mentioned in all books dealing with early modern architecture in Japan. The many pupils he taught over the years were to form the first generation of Japanese architects building in the Western style. He remained in Japan until his death and is buried at Gokokuji Temple, Tokyo.