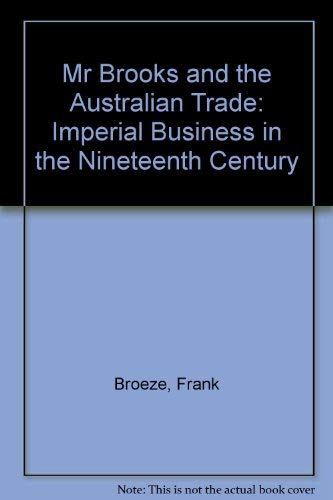 Mr Brooks And The Australian Trade. Imperial Business In The Nineteenth Century

In bright condition with a similar dust jacket which is a little faded on the spine, contents clean Size: 8vo - over 7ľ" - 9ľ" tall. Codice inventario libreria 051321

Successful businessman by any yardstick, Robert Brooks was one of the leaders of trade between Britain and Australia from the 1820s to the 1870s. He was active in all its sectors - shipping, commerce, finance, banking, investment, migration.
Brooks was the influential and longest-serving founding director of the Union Bank of Australia and one of the largest importers of wool in London. He managed his manifold business interests from a City counting-house with a handful of clerks, having only once ventured to Australia.
This dynamic and innovative business biography looks afresh at the economic relationship between Britain and Australia. It breaks new ground in systematically studying the wool trade, the sailing-ship industry, Australia's import trade, the rise of the City of London and the financial services sector of the British economy, the relationship between business and government, private merchant financing and the connection between corporate and private finance.
Parallels between Brooks' career and fluctuations of the Australian trade and economy are striking. And we are reminded that business history must take account of the interests and personality of its leaders. The success of this boy from a Lincolnshire village rested on hard work, caution, flexibility, good personal relations, uncompromising standards, attention to detail and intensive communication with agents. There is much to learn from Frank Broeze's major contribution to Australian and British economic, financial and maritime history.

Frank Broeze is Associate Professor of History at the University of Western Australia.

Clarendon Books was established in 1984 and we currently hold a medium stock at our shop in Leicester. There is an emphasis on history, literature and the arts. Our stock ranges from modern academic books to the more collectable and rare. We are interested in buying in all areas and in all quantites from single volumes to complete libraries.


We accept payment direct with most major credit and debit cards. Sterling cheques, paypal and bank transfers are also accepted. Details on how to contact us can be found by clicking on our Bookseller name. All books should be paid for in advance unless the purchaser is a member of a recognised trade association or otherwise known to us. Insurance, if required is additional and charged at cost. Any item found not to be as described may be returned within 10 days of receipt, provided that advance ...