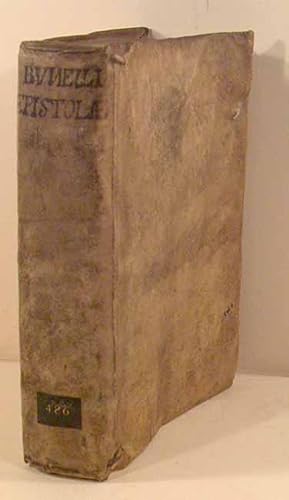 BUNEL, Pierre, and MANUZIO, Paulo. PETRI BUNELLI, GALLI, PRAECEPTORIS, & PAULAE MANUTII, DISCIPULI, EPISTOLAE CICERONIANO STYLO SCRIPTAE. Aliorum Gallorum Pariter et Italorum Epistolae eodem Stylo Scriptae. Geneva (Henri Estienne) 1581. Octavo. (vii)240(1)319pp. First and only authorized edition. A piracy may have been published in the same year. Estienne woodcut device on title (a philosopher standing at the foot of the Tree of Knowledge, and the motto "noli altum sapere.") The idea for this book stemmed from a conversation between the printer, Henri Estienne, who was known for his erudition, and King Henri III, the dedicatee. The King had asked why Italy, rather than France, claimed the most and best Ciceronian Latinists. Estienne went away and stewed a while, then described the conversation in Latin verse (quoted by Renouard), and published this comparison of letters written in Ciceronian Latin by Pierre Bunel (1499-1546) and by the great editor of Cicero, Paulus Manutius, son and successor to Aldus. Estienne here champions French Ciceronians, printing the letter in which Manutius admits having learned to write correctly from Bunel, his companion of 40 years (p.111). Bunel's "Familiares aliquot Epistulae," (Paris, Estienne, 1551) was intended for juvenile readers ("in Adulescentiorum Ciceronis studiosorum gratiam"). The second portion, with its own half-title and pagination, contains the letters of Italians such as Longolio and Bembo, and the third, also with half-title, is a group of letters from French Latinists, including King Francis I. In early limp vellum, spine titled in ink. Pastedowns pulling loose; front fly adhering partially to paste-down; light spotting to title, and light marginal dampstain persisting to p.6; browning and corners torn off from pp. x-xi, not affecting text. Covers show age and soil. Small leather library label to spine. (Renouard 1581.5. British Museum 1084 i. 5. OCLC lists 3 copies in the USA). Codice inventario libreria 76308

OUR STOCK of some 30,000 volumes includes one of the largest and finest inventories of books relating to Japan and East Asia in the country. In addition to a large general antiquarian stock, our areas of particular expertise are: children's books, photographica, Americana, historical archives, women's books, color plate books, early maps and atlases, sets and fine bindings, American and British literature, Japanese woodblock print books from the 18th, 19th and 20th centuries, and travel and exploration. We buy and sell books in all these categories. Through the years, we have issued over 50 catalogues of general antiquarian and literary materials, along with 30 catalogues relating to Japan and East Asia. Members of the firm travel extensively in America and Asia, to buy libraries and to attend bookfairs and auctions.


All items sold net, paid in advance save by prior arrangement. Domestic shipping (via UPS or
Priority Mail) includes postage, handling & insurance. $6.50 first volume, $1.50 each additional for
Media Mail/orders under $100; $10.50 via UPS or Priority Mail. Overage due to excessive size and
weight will be adjusted. Foreign shipping to be determined. Payment by VISA/MC, money
order or check. Payment must be made in US funds and drawn on a US bank. Title does not pass
until payment is made in full....