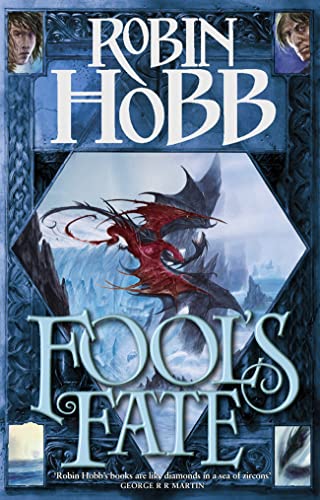 The triumphant conclusion to our three thrilling fantasy series, from the author of the bestselling Farseer and Liveship traders trilogies.

The only hopes for an end to war and insurrection in the Six Duchies rests in the hands of the small party that are embarked on a desperate quest to the frozen island of Aslevjal.

Here, so legend says, lies the sleeping form of the legendary great black dragon, Icefyre. The beast is of holy significance to the people of the OutIslands, a powerful talisman, but it is this dragon that their Narcheska has challenged Prince Dutiful to kill. All he has to help him in this in the company of his small coterie: the mercurial old assassin, Chade, the gifted but slow-witted servant boy, Thick, and their Skillmaster, Fitz. The other member of the group has been left behind in Buckkeep, but the Fool will do everything in his power to be with them on the island – he has seen that this is his final destiny.

When the ship finally reaches the desolate island it seems out of the question that anything could exist on this wasteland, yet the discoveries that Dutiful and his friends make will not only put the quest and their lives in jeopardy, it will also shape the future of the whole world.

The Tawny Man Book 3 (provisional title: FOOL’S END) brings not only this trilogy but also the Farseer trilogy begun with ASSASSIN’S APPRENTICE in 1996 to a spectacular conclusion. Filled with breathtaking drama and powerful character-led story-telling, Robin Hobb’s writing is in a class of its own.

Assassin’s Apprentice:
‘A wonderful book, written by a writer at the height of her abilities’
J V JONES

Robin Hobb was born in California in 1952 and majored in Communications at Denver University, Colorado. Assassin’s Apprentice was her first novel, and was followed by the equally successful Royal Assassin and Assassin’s Quest. She lives outside Seattle, Washington.