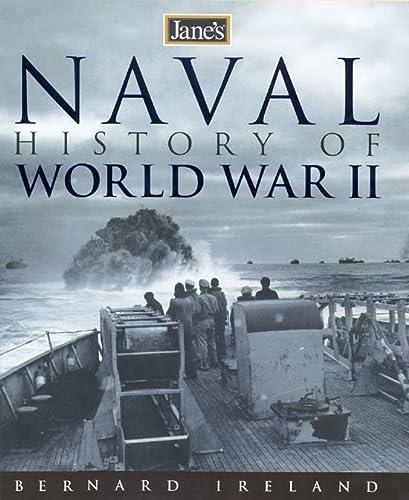 In Jane’s Naval History of World War II, he covers all the different types of warship that fought from the Atlantic and Arctic to the Pacific Ocean. From aircraft carriers to submarines, assault ships to destroyers and cruisers, his paintings bring to life the incredible variety of warships that took part in the greatest naval conflict in history.

Naval historian Bernard Ireland offers new insights to the conflict, investigating how German U-boats ultimately lost the battle of the Atlantic while US submarines annihiliated Japan’s merchant navy. His own career in naval engineering enables him to reveal all sorts of hidden details that make Jane’s Naval History of World War II a radical new contribution to 20th century history.

Bernard Ireland has written many books on warship and naval warfare including ‘Jane’s Battleships of the 20th Century’, ‘The Mediterranean Campaign 1940-43’, ‘Crusaders of World War II’.

''Jane’s
Naval History of World War II
'
THE MEN, THE SHIPS & THE TACTICS OF THE GREATEST NAVAL WAR IN HISTORY
'

Naval warfare played a decisive role in deciding World War II. In this new study, naval historian Bernard Ireland reveals the critical elements that determined the war at sea. He investigates how German U-boats came perilously close to snapping Britain’s Atlantic lifeline, and why the submarines were eventually defeated. By contrast, American submarines inflicted such devastating losses on Japanese merchant shipping that the Japanese war economy collapsed. In Europe and the Pacific, the Allies had to develop new techniques of amphibious warfare if they were to defeat their opponents. Airpower came to dominate the naval war; growing from a useful adjunct to fleet operations, it became a decisive weapon in itself, relegating the great battleships to subordinate roles. Airpower, convoys, amphibious assaults and submarine operations: these were the vital areas of the naval war. Failure in any one element would mean losing the war.