Articoli correlati a A Caribbean Mystery 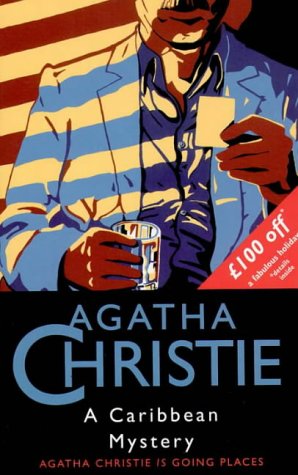 As Miss Marple sits in the Carribbean sun, pondering how nothing ever happens here, her attention is aroused by an old soldier's story about a strange coincidence. Infuriatingly, just as he is about to show her an astonsihing photograph, his mind begins to wander, and he doesn't finish the story.

Agatha Christie is known throughout the world as the Queen of Crime. Her books have sold over a billion copies in English with another billion in over 70 foreign languages. She is the most widely published author of all time and in any language, outsold only by the Bible and Shakespeare. She is the author of 80 crime novels and short story collections, 20 plays, and six novels written under the name of Mary Westmacott.

As Miss Marple sat basking in the Caribbean sunshine she felt mildly discontented with life. True, the warmth eased her rheumatism, but here in paradise nothing ever 'happened'.

Eventually, her interest was aroused by an old soldier’s yarn about a strange coincidence. Infuriatingly, just as he was about to show her an astonishing photograph, the Major’s attention wandered. He never did finished the story...

'Agatha Christie' was born in Torquay 1890 and became, quite simply, the best-selling novelist in history. She wrote 79 crime mysteries and collections, and saw her work translated into more languages than Shakespeare. Her enduring success, enhanced by many film and TV adaptations, is attribute to the timeless appeal of her characters and the unequalled ingenuity of her plots.

Descrizione libro Condizione: Very Good. Shipped within 24 hours from our UK warehouse. Clean, undamaged book with no damage to pages and minimal wear to the cover. Spine still tight, in very good condition. Remember if you are not happy, you are covered by our 100% money back guarantee. Codice articolo 6545-9780006164357

Descrizione libro Condizione: Very Good. This book is in very good condition and will be shipped within 24 hours of ordering. The cover may have some limited signs of wear but the pages are clean, intact and the spine remains undamaged. This book has clearly been well maintained and looked after thus far. Money back guarantee if you are not satisfied. See all our books here, order more than 1 book and get discounted shipping. . Codice articolo 7719-9780006164357

Descrizione libro Paperback. Condizione: Used; Good. **Simply Brit** Shipped with Premium postal service within 24 hours from the UK with impressive delivery time. We have dispatched from our book depository; items of good condition to over ten million satisfied customers worldwide. We are committed to providing you with reliable and efficient service at all times. Codice articolo 1276629

10. A Caribbean Mystery (The Christie Collection)

Descrizione libro Paperback. Condizione: Used; Good. **SHIPPED FROM UK** We believe you will be completely satisfied with our quick and reliable service. All orders are dispatched as swiftly as possible! Buy with confidence!. Codice articolo mon0001618699