Articoli correlati a On Queer Street 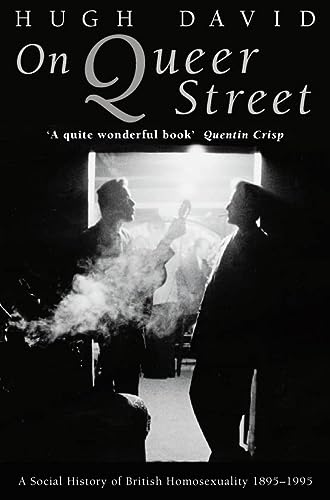 The hidden history of the gay community this century.

Long before Oscar Wilde ‘corrupted and debauched the morals’ of his young lovers, homosexual men were finding their own place in society. Later, as homoerotic ‘ladlove’ was celebrated in fiction and poetry by A E Housman, E M Forster and others, gay writers and artists hid their sexuality behind a glittering and thinly veiled social image. Yet the unspoken tolerance of homosexuality that continued and strengthened during the World Wars turned to persecution in post-war Britain, and gay men once again found themselves living with a dangerous secret that would take decades to find acceptance.

Hugh David traces the homosexual experience from its struggle with Victorian morality through the decriminalization of homosexual acts in 1967 to the end-of-the-century ravages of HIV and AIDS. Frank and often funny, he weaves accounts from ‘ordinary’ gay men with those of the famously queer to produce a vivid social history of homosexual life.

‘David’s quest has been to delve into what many people really thought – and, more importantly, what they actually did. He is a generous host to many voices, his aim being to let his guests tell their own story.’
Matthew Parris, Sunday Times

Hugh David is the author of the much-praised The Fitzrovians (Michael Joseph, 1988) and Heroes, Mavericks and Bounders (Michael Joseph, 1991), as well as a controversial biography of Stephen Spender (Heinemann, 1992). He writes regularly for national newspapers and magazines, most notably The Times. He lives in London.

Descrizione libro Hardback. Condizione: Very Good. The book has been read, but is in excellent condition. Pages are intact and not marred by notes or highlighting. The spine remains undamaged. Codice articolo CIN000017090

Descrizione libro Hardback. Condizione: Very Good. The book has been read, but is in excellent condition. Pages are intact and not marred by notes or highlighting. The spine remains undamaged. Codice articolo GOR001412694

Descrizione libro HarperCollins Publishers Ltd, 1998. Paperback. Condizione: Good. Light foxing to page edges Good condition is defined as: a copy that has been read but remains in clean condition. All of the pages are intact and the cover is intact and the spine may show signs of wear. The book may have minor markings which are not specifically mentioned. Most items will be dispatched the same or the next working day. Codice articolo wbb0015216969