Articoli correlati a Scales of Justice 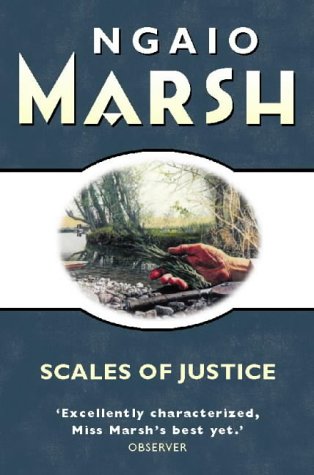 A brutal murder with a golf club and an ingenious plot bursting with snobbery, suspicion , adultery and secrets – to say nothing of the dreadful crime of catricide...

The lives of the inhabitants of Swevenings are disrupted only by a fierce competition to catch the Old Un, a monster trout known to dwell in a beautiful stream which winds past their homes.

Then one of their small community is found brutally murdered; beside him is the freshly killed trout. Both died by violence – but Chief Detective Inspector Roderick Alleyn’s murder investigation seems to be much more interested in the fish...

Winner of a Crime Writers’
Association
‘Red Herring Award’
in 1955

‘The detection is first class. The whole affair is written with style and distinction.’
BBC

‘The finest writer in the English languange of the pure, classical puzzle whodunnit. Among the crime queens, Ngaio Marsh stands out as an Empress.’
The Sun

Dame Ngaio Marsh was born in New Zealand in 1895 and died in February 1982. She wrote over 30 detective novels and many of her stories have theatrical settings, for Ngaio Marsh’s real passion was the theatre. She was both actress and producer and almost single-handedly revived the New Zealand public’s interest in the theatre. It was for this work that she received what she called her ‘damery’ in 1966.

Descrizione libro HarperCollins, 1999. Paperback. Condizione: Good. Light foxing to page edges Good condition is defined as: a copy that has been read but remains in clean condition. All of the pages are intact and the cover is intact and the spine may show signs of wear. The book may have minor markings which are not specifically mentioned. Most items will be dispatched the same or the next working day. Codice articolo wbb0015003574

3. Scales Of Justice (b Format)

Descrizione libro UK General Books 1999-04-26, 1999. Paperback. Condizione: Good. Item is in good condition. Some moderate creases and wear. This item may not come with CDs or additional parts including access codes for textbooks. Might be an ex-library copy and contain writing/highlighting. Photos are stock pictures and not of the actual item. Codice articolo DS-0006512429-3