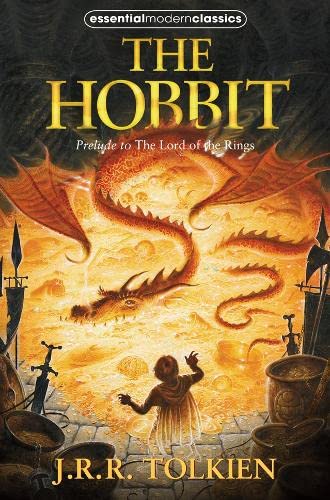 The Hobbit is the unforgettable story of Bilbo, a peace-loving hobbit, who embarks on a strange and magical adventure.

Bilbo Baggins enjoys a quiet and contented life, with no desire to travel far from the comforts of home; then one day the wizard Gandalf and a band of dwarves arrive unexpectedly and enlist his services – as a burglar – on a dangerous expedition to raid the treasure-hoard of Smaug the dragon. Bilbo’s life is never to be the same again.

Seldom has any book been so widely read and loved as J.R.R. Tolkien’s classic tale, ‘The Hobbit’. Since its first publication in 1937 it has remained in print to delight each new generation of readers all over the world, and its hero, Bilbo Baggins, has taken his place among the ranks of the immortals of fiction.

‘The greatest children’s book ever written... Funny, frightening, dense with detail and gloriously vivid, it is the one adventure story every eight-year-old should have.’
Amanda Craig, The Times

‘The English-speaking world is divided into those who have read The Hobbit and The Lord of the Rings and those who are going to read them.’
Sunday Times

‘A finely written saga of dwarves and elves, fearsome goblins and trolls... an exciting epic of travel and magical adventure, all working up to a devastating climax.’
Observer

J.R.R. Tolkien was born on 3rd January 1892 in Bloemfontein. After serving in the First World War, he embarked upon a distinguished academic career and was recognised as one of the finest philologists in the world. He is, however, best known for his extraordinary works of fiction The Hobbit, The Lord of the Rings and The Silmarillion. He died on 2nd September 1973 at the age of 81.