Articoli correlati a A Day With Wilbur Robinson

A Day With Wilbur Robinson 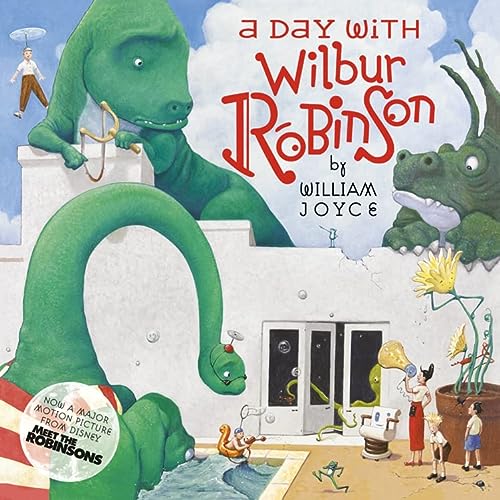 Visit the greatest place on earth in the first ever UK publication of the modern classic, A Day with Wilbur Robinson. This publication coincides with the release of the Disney – Touchstone Pictures film, Meet the Robinsons, based on this original story.

Come and meet the Robinsons!

Young Wilbur has a robot.
Uncle Art has his own flying saucer.
Cousin Laszlo has an antigravity device.
The butler is an octopus.
It’s snowing in the east wing.
And somebody has left the Time Machine on.
Anything could happen at the Robinsons... and it does!

With its stylish – and slightly surreal – illustrations and lively, inventive story, this picture book has quickly become a modern classic – and is soon to become a favourite film!

This first ever UK publication coincides with the release of the major film from Disney – Touchstone Pictures, Meet the Robinsons. The computer animated film is based on this original story and will be released on 30 March 2007 (tbc).

William Joyce: One of the Top People to Watch in the New Millennium – ‘Newsweek’

Praise for A Day with Wilbur Robinson

"Joyce's illustrations stimulate the imagination and are a joy to behold."
Irish Times

"A madcap picture book! Brilliantly styled illustrations... I keep going back to enjoy it all over again!"
Primary Times

William Joyce paints and writes most of the time. He has produced two animated television shows based on his books: ‘Rolie Polie Olie’ and ‘George Shrinks’. He also produced and designed the animated feature film ‘Robots’. At the start of his painting career, he found that gallery owners weren’t interested in the images that made him happy – suburbab backyards filled with floating family members, flying saucers and baseball-playing dinosaurs. ‘Then I backed into the world of children’s picture books. I’d found paradise!’

William Joyce lives with his wife and two children in Louisiana, USA.

1. A Day with Wilbur Robinson

2. A Day with Wilbur Robinson