Articoli correlati a Listen to This

Ross, Alex Listen to This 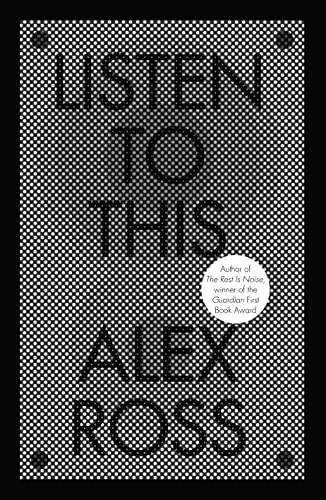 In Listen to This, Alex Ross, the music critic for The New Yorker, looks both backward and forward in time, capturing essential figures and ideas in classical-music history as well as giving an alternative view of recent pop music that emphasizes the power of the individual musical voice in whatever genre.

Alex Ross’s award-winning international bestseller, The Rest is Noise: Listening to the Twentieth Century, has become a contemporary classic, establishing him as one of our most popular and acclaimed cultural historians.

In Listen To This Ross, the music critic for the New Yorker, looks both backwards and forwards in time, capturing essential figures and ideas in classical music history, as well as giving an alternative view of recent pop music that emphasizes the power of the individual musical voice.

After relating his first encounter with classical music, Ross vibrantly sketches canonical composers such as Schubert, Verdi and Brahms; gives us in-depth interviews wth modern pop masters such as Bjork and Radiohead; and introduces us to music students at a Newark high school and to indie-rock hipsters in Beijing. In his essay ‘Chacona, Lamento, Walking Blues’, Ross brilliantly retells hundreds of years of music history - from Renaissance dance to Led Zeppelin - through a few iconic bass lines of celebration and lament.

Whether his subject is Mozart or Bob Dylan, Ross writes in a style at once erudite and lively, showing how music expresses the full complexity of the human condition. He explains how pop music can achieve the status of high art and how classical music can become a vital part of the wider contemporary culture. Witty, passionate and brimming with insight, Listen to This teaches us to listen more closely.

‘Chacona, Lamento, Walking Blues..This essay is Alex Ross’s own chaconne, one that only he could have written – a display of lateral thinking as virtuosic, in its own way..It alone is worth the price of the book, which I strongly encourage you to buy’ Damian Thompson, Sunday Telegraph

‘These hugely enjoyable and serendipitous essays were written over more than a decade, resulting in a rewarding historical perspective. Ross's rapid-fire discourses on music from very different parts of the musical spectrum create fascinating perspectives. One minute, you're immersed in Mozart, and then suddenly you're on tour with Radiohead and contemplating what it must have felt like for an unworldly Finnish conductor, Esa-Pekka Salonen, to take the reins of the LA Philharmonic. Reading the book is the literary equivalent of an iPod on shuffle; it offers fresh and unexpected stimulation at every turn.’ Charles Hazlewood, Guardian

‘The qualities that make him a top-notch critic become clearer in concentrated reading...Ross is an avowed buff. He loves music with a nerdish obsession and he wants you to love it as much as he does’ New Statesman, Norman Lebrecht

Praise for ‘The Rest is Noise’:

‘It’s a history of 20th-century music so vivid and original in approach that it made me listen again to many pieces I thought I knew well.’ Philip Pullman, Guardian (Books of the Year)

‘Ranks as my non-fiction book of the year. Erudite and engaging, written with flair and passion.’ Boyd Tonkin Independent (Books of the Year)

ALEX ROSS has been the music critic of The New Yorker since 1996. From 1992 to 1996 he wrote for the New York Times. His first book, The Rest is Noise: Listening to the Twentieth Century, published in 2007, was awarded The Guardian First Book Award and was shortlisted for the Pulitzer and Samuel Johnson prizes. In 2008 he became a MacArthur Fellow. A native of Washington, DC, he now lives in Manhattan.

3. Listen to This : Essays on Music