Articoli correlati a How the Grinch Stole Christmas! Pocket Edition 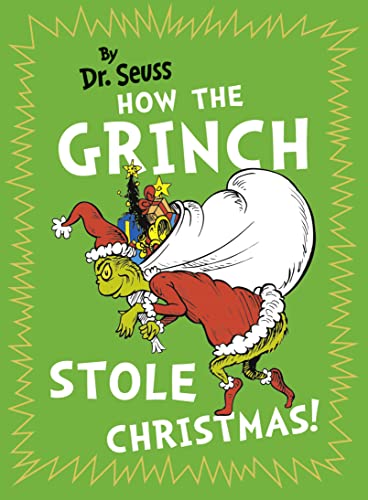 A special pocket-sized edition of the classic Christmas story from Dr. Seuss. With wacky rhymes and zany artwork, it tells the tale of the disgruntled Grinch and his fiendish attempts to steal Christmas from the citizens of Who-ville! Perfect for gifting or as a stocking-filler.

“The Grinch hated Christmas! The whole Christmas season!
Now, please don’t ask why. No one quite knows the reason...”

With a heart two sizes too small, the Grinch is the meanest creature you’ll ever meet. He hates Christmas and the whole festive season. But when he hatches a dastardly plot to steal Christmas, he’s in for a big surprise!

With hilarious rhymes and beautiful illustrations, this classic seasonal story has become a favourite for good reason and teaches readers the true meaning of Christmas. Now in a beautifully packaged pocket-sized edition that is perfect as a gift or stocking-filler.

Praise for Dr. Seuss:
“[Dr. Seuss] has...instilled a lifelong love of books, learning and reading [in children]” The Telegraph

“Dr. Seuss ignites a child’s imagination with his mischievous characters and zany verses” The Express

“The magic of Dr. Seuss, with his hilarious rhymes, belongs on the family bookshelf” Sunday Times Magazine

“The author... has filled many a childhood with unforgettable characters, stunning illustrations, and of course, glorious rhyme” The Guardian

Praise for And To Think That I Saw it On Mulberry Street:
“The cleverest book I have met with for many years. The swing and merriment of the pictures and the natural truthful simplicity of the untruthfulness.”
Beatrix Potter, author of The Tale of Peter Rabbit

Theodor Seuss Geisel – better known to his millions of fans as Dr. Seuss – was born the son of a park superintendent in Springfield, Massachusetts, in 1904. After studying at Dartmouth College, New Hampshire, and later at Oxford University in England, he became a magazine humorist and cartoonist, and an advertising man. He soon turned his many talents to writing children’s books, and his first book – ‘And to Think That I Saw It on Mulberry Street’ – was published in 1937. His greatest claim to fame was the one and only ‘The Cat in the Hat’, published in 1957, the first of a successful range of early learning books known as Beginner Books.

How The Grinch Stole Christmas

How The Grinch Stole Christmas