Articoli correlati a The Border 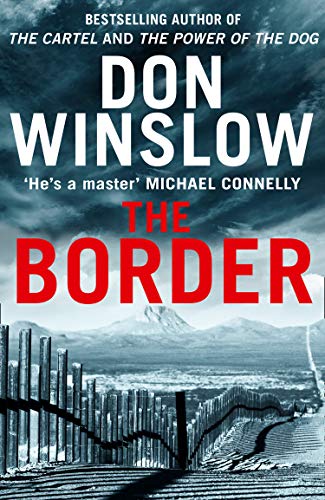 The explosive, highly anticipated conclusion to the epic Cartel trilogy from the New York Times bestselling author of The Force.

The war has come home.

For more than forty years, Art Keller has been on the front lines of America’s longest conflict: the war on drugs. His obsession with defeating the godfather of the Sinaloa Cartel – Adán Barrera – has cost him the people he loves, even taken a piece of his soul.

Now Keller is elevated to the highest ranks of the DEA, only to find that in destroying one monster he has created thirty more that are wreaking chaos in his beloved Mexico. And not just there.

Fighting to end the heroin epidemic scourging America, Keller finds himself surrounded by an incoming administration that’s in bed with the very drug traffickers that Keller is trying to bring down.

From the slums of Guatemala to the marbled corridors of Washington, D.C., Winslow follows a new generation of narcos, cops, addicts, politicians, and mere children fleeing the violence for the chance of a life in a new country.

A shattering tale of vengeance, corruption and justice, The Border is an unflinching portrait of modern America, a story of – and for – our time.

‘Brutal and brilliant, this is crime’s Game of Thrones’ Sun

‘One of the great literary achievements of the century so far ... Winslow’s work is witty and thrilling as well as righteous’ Sunday Independent

‘Horrifying and insanely gripping. It is an epic game of cajones played out against the beauty of the natural world ... such crime writing deserves nothing less than a Pulitzer Prize’ Evening Standard

‘The [Cartel] trilogy is one of the great literary achievements of the century ... Winslow’s works is witty and thrilling as well as righteous ... we need writers who bear witness to the truth as unflinchingly as Winslow’ Daily Telegraph

‘Phenomenal ... epic in scope and achievement ... an astonishing end to a truly important trilogy’ Big Issue

‘A pleasure to read: his writing style is direct, intelligent and forceful ... his research is impeccable’ The Times, Books of the Year

‘A furious, impassioned novel ... a powerful – and painful – journey through a contemporary version of hell. Rarely has hell been so compelling’ Washington Post

‘Devastating and timely ... a hybrid The Godfather and War and Peace’ New York Times

‘This is relentless, almost overwhelming stuff ... Winslow’s great achievement is to take the unbearable and turn it into something much more than simple entertainment’ Mail on Sunday

‘A gift to all discerning crime readers ... With a dramatis personae that makes Tolstoy look underpopulated, this is Winslow at his sensational best’ Financial Times

The final gripping thriller in the bestselling Cartel trilogy

Descrizione libro HarperCollins, 2019. Hardcover. Condizione: New. Hardcover. 'The year's best thriller' The Times, Books of the Year The explosive, highly anticipated conclusion to the epic Cartel trilogy from the New York Times b.Shipping may be from our Sydney, NSW warehouse or from our UK or US warehouse, depending on stock availability. 736 pages. 1.082. Codice articolo 9780008227531