Articoli correlati a Paddington Turns Detective and Other Funny Stories 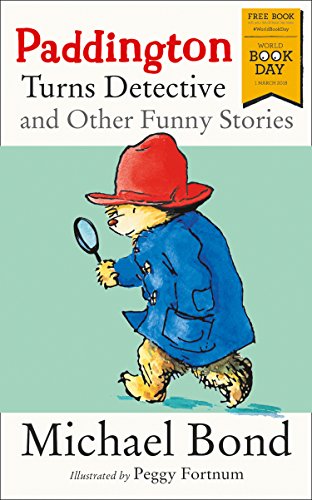 Three classic Paddington Bear stories, by beloved author Michael Bond, are brought together for the first time in this special collection for World Book Day 2018.

Nothing is ever straightforward when Paddington is involved. Whether he is attempting detective work, helping to sail a boat or performing magic, ordinary things have a habit of becoming quite extraordinary!

Laugh out loud with everyone’s favourite bear from Darkest Peru!

“...a delight throughout...” Financial Times

Praise for Love From Paddington:

“...a jolly ride through the best of the Paddington tales” The Times

Praise for the Paddington series:

‘I’ve always had great respect for Paddington...He is a British institution.’ Stephen Fry

‘Paddington has joined Pooh as one of the great bears of English children’s literature.’ The Teacher

‘Michael Bond’s accident-prone bear...has become one of the most enduring of children’s characters.’ The Bookseller

Michael Bond was born in Newbury, Berkshire on 13 January 1926 and educated at Presentation College, Reading. He served in the Royal Air Force and the British Army before working as a cameraman for BBC TV for 19 years. In 2015, Michael was awarded a CBE for his services to children’s literature, to add to the OBE he received in 1997. Michael died in 2017, leaving behind one of the great literary legacies of our time.