Articoli correlati a The Creativity Code 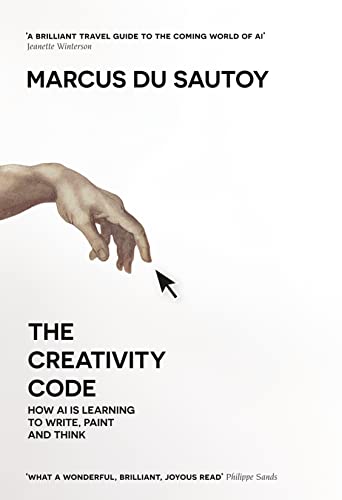 Will a computer ever compose a symphony, write a prize-winning novel, or paint a masterpiece? And if so, would we be able to tell the difference?

As humans, we have an extraordinary ability to create works of art that elevate, expand and transform what it means to be alive.

Yet in many other areas, new developments in AI are shaking up the status quo, as we find out how many of the tasks humans engage in can be done equally well, if not better, by machines. But can machines be creative? Will they soon be able to learn from the art that moves us, and understand what distinguishes it from the mundane?

In The Creativity Code, Marcus du Sautoy examines the nature of creativity, as well as providing an essential guide into how algorithms work, and the mathematical rules underpinning them. He asks how much of our emotional response to art is a product of our brains reacting to pattern and structure, and exactly what it is to be creative in mathematics, art, language and music.

Marcus finds out how long it might be before machines come up with something creative, and whether they might jolt us into being more imaginative in turn. The result is a fascinating and very different exploration into both AI and the essence of what it means to be human.

‘What a wonderful, brilliant, joyous read! Marcus makes it seem so easy, and such fun, to begin to understand that which appears complex, frightening and beautiful, and the magic of being human’ Philippe Sands

‘The Creativity Code is only partly a book about AI art. It is as much about how AI thinks and how it does mathematics ― du Sautoy’s own special subject. And on these topics, he is thoughtful and illuminating’ The Times

‘Du Sautoy is [...] the light-bearer, illuminating not only the work of coders and creators, but the mathematics of chaos that underpin art and our emotional responses to it’ Hans Ulrich Obrist

‘Why could a machine one day not create a truly original work of art, write a moving poem, compose an opera or even discover a mathematical theorem? The answers, in this compelling and thought-provoking book by mathematician and musician, Marcus du Sautoy, can be found by breaking down what it actually means to be creative’ Jim Al-Khalili

‘Fact-packed and funny, questioning what we mean by creative and unsettling the script about what it means to be human, The Creativity Code is a brilliant travel guide to the coming world of AI’ Jeanette Winterson

‘Fascinating book ... if all the experiences, hopes, dreams, visions, lusts, loves and hatreds that shape the human imagination amount to nothing more than a “code”, then sooner or later a machine will crack it. Indeed, Du Sautoy assembles an eclectic array of evidence to show how that’s happening even now’ The Times

Marcus du Sautoy holds Oxford University's prestigious Simonyi Chair for the Public Understanding of Science, a post previously held by Richard Dawkins, and is also a professor of Mathematics. He has presented numerous programmes on television and radio, including the internationally acclaimed BBC series The Story of Maths and the comedy maths show The School of Hard Sums with Dara Ó Briain. He writes extensively for the Guardian, The Times and the Daily Telegraph and has written and performed a new play called X&Y which has been staged in London’s Science Museum and Glastonbury Festival. He received an OBE for services to science in the 2010 New Year’s Honours List.

4. The Creativity Code: How AI is learning to write, paint and think

Descrizione libro 2019. Hardcover. Condizione: New. Hardcover. Will a computer ever compose a symphony, write a prize-winning novel, or paint a masterpiece? And if so, would we be able to tell the difference? As humans, we have an extrao.Shipping may be from our Sydney, NSW warehouse or from our UK or US warehouse, depending on stock availability. 336 pages. 0.544. Codice articolo 9780008288150