Lee, Alan The Hobbit Sketchbook & The Lord of the Rings Sketchbook

The Hobbit Sketchbook & The Lord of the Rings Sketchbook 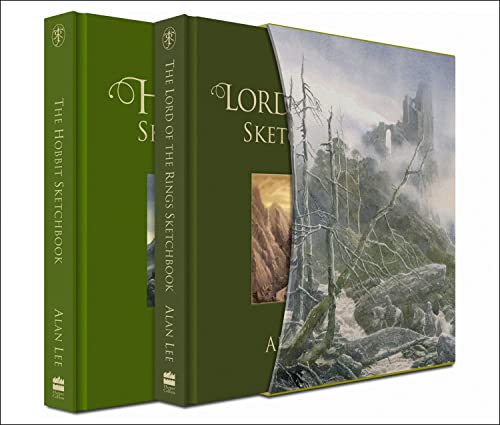 Presenting two richly illustrated books in one elegant slipcase, this deluxe, limited edition boxed set celebrates in words and pictures the beautiful work that award-winning artist Alan Lee has created for J.R.R. Tolkien’s The Hobbit and The Lord of the Rings.

Sumptuously bound in full cloth, with a miniature colour image embossed into the front board, each large-format volume overflows with hundreds of delicate pencil drawings and conceptual sketches, and dozens of haunting watercolour paintings, including many brand-new Hobbit paintings and drawings that take us deeper into the magical world of Bilbo Baggins.

This very special set unlocks the secret of how Alan creates his own Middle-earth magic and provides a fascinating insight into the imagination of the man who breathed new life into Tolkien’s vision. It is limited to a worldwide printing of just 3,000 numbered copies and each copy of The Hobbit Sketchbook has been personally signed by the artist.

‘Alan Lee’s artwork has a beauty and lyricism about it. His art captured what I hoped to capture with the films.’
Peter Jackson

Praise for the ‘Great Tales’ trilogy:
‘[The Children of Húrin is] the darkest of all Tolkien’s tales. Alan Lee’s illustrations complement the writing splendidly.’
Times Literary Supllement

‘Critical moments are caught [in Beren and Lúthien], as in The Children of Húrin, by Alan Lee’s nine outstanding colour plates.’
Times Literary Supplement

Alan Lee was born in Middlesex in 1947. His illustrated books include Faeries (with Brian Froud), Castles and Merlin Dreams, and the three ‘Great Tales’ of Middle-earth: The Children of Húrin, Beren and Lúthien, and The Fall of Gondolin. He has worked on such prestigious films as Erik the Viking (Terry Gilliam), Legend (Ridley Scott), and the acclaimed NBC miniseries Merlin. He is best known, however, for his work on the books The Hobbit and The Lord of the Rings, and now the film versions.

The Hobbit & The Lord of the Rings Sketchbooks (Limited 3000)

The Hobbit & The Lord of the Rings Slipcased Sketchbooks - SIGNED By Alan Lee!

Descrizione libro Hard Cover. Condizione: Fine. Condizione sovraccoperta: None (as issued). 1st eds/1st prs. Signed limited edition set (1 of 3000) of both The Hobbit & The Lord of the Rings Sketchbooks in deluxe limited edition format. No dustjackets, bound in lovely green cloth with inlaid gold titling and a lovely color cover illo. The set comes in a pictorial slipcase based on an Alan Lee painting. The Hobbit volume is signed and numbered by Alan Lee. When you receive these books, you'll feel as though you've stumbled into a cave and come across.an elven sword named Glamdring -- or the crown of the fabled Prester John -- a ring of invisibility.or even a Magic Lamp, prosaic as that may sound! You MAY even cartwheel with glee!. Signed by Author. Book. Codice articolo 034187

The Hobbit & The Lord of the Rings Sketchbooks

Descrizione libro Condizione: Good. A+ Customer service! Satisfaction Guaranteed! Book is in Used-Good condition. Pages and cover are clean and intact. Used items may not include supplementary materials such as CDs or access codes. May show signs of minor shelf wear and contain limited notes and highlighting. Codice articolo 0008367434-2-4