Articoli correlati a Comparative Policing Issues: The British and American... 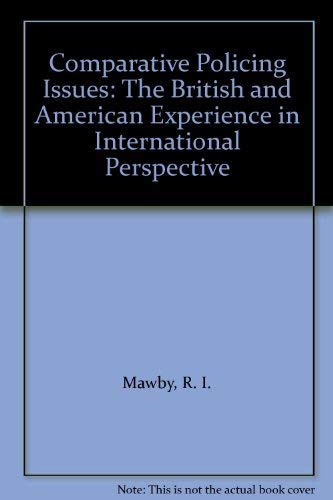 A dramatic increase in interest in police issues in recent years has provoked a series of questions about the emergence of modern police systems - their structure and functions and the relationship between police and public. This introductory comparative text provides an international perspective. Following an examination of how the modern police emerged, linking this with comparative methods of analysis, the book progresses with sections focusing on policing in a wide range of different societies: France and The Netherlands - Western European societies; Canada and Hong Kong - influenced by the colonial tradition; Japan - an Eastern capitalist society; The USSR, China and Cuba - contrasting communist systems. Each is considered in terms of the relationship between the police and the communities they "serve". The resulting comparative analysis throws up a number of important questions: can ideas be transferred from one society to another?; are communist police structures significantly different?; how accountable are the police in different societies?

Book by Mawby R I

Descrizione libro Routledge. Condizione: Good. . A copy that has been read but remains intact. May contain markings such as bookplates, stamps, limited notes and highlighting, or a few light stains. Codice articolo B11B-01339

Descrizione libro Routledge, 1992. Paperback. Condizione: GOOD. Spine creases, wear to binding and pages from reading. May contain limited notes, underlining or highlighting that does affect the text. Possible ex library copy, will have the markings and stickers associated from the library. Accessories such as CD, codes, toys, may not be included. Codice articolo 3262965144

Descrizione libro Routledge, 1990. Condizione: Poor. This is an ex-library book and may have the usual library/used-book markings inside.This book has soft covers. With usual stamps and markings, In poor condition, suitable as a reading copy. Please note the Image in this listing is a stock photo and may not match the covers of the actual item,400grams, ISBN:9780044455448. Codice articolo 8815207

Descrizione libro Routledge, 1992. Condizione: Good. A+ Customer service! Satisfaction Guaranteed! Book is in Used-Good condition. Pages and cover are clean and intact. Used items may not include supplementary materials such as CDs or access codes. May show signs of minor shelf wear and contain limited notes and highlighting. Codice articolo 0044455445-2-4

Descrizione libro Routledge, 1992. Paperback. Condizione: Very Good. The book has been read, but is in excellent condition. Pages are intact and not marred by notes or highlighting. The spine remains undamaged. Codice articolo GOR003087014