Articoli correlati a The Reckoning 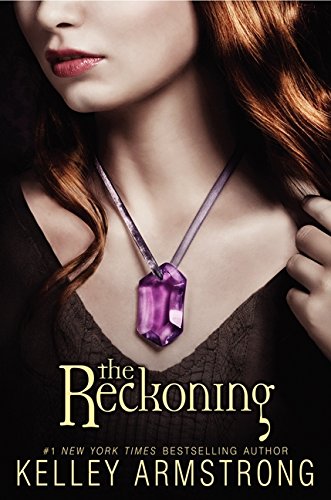 Fifteen-year-old Chloe, a necromancer, struggles to understand her feelings for werewolf Derek and his sorcerer brother, Simon, while seeking a way to enter the headquarters of the sinister Edison Group to rescue her aunt Lauren and friend Rachelle. 150,000 first printing.

For THE SUMMONING: “Terrifying ghosts, smatterings of gore and diverse teen voices will prompt young adults to pick up the next in this series.” (Kirkus Reviews (starred review))

For THE SUMMONING“Suspenseful, well-written and engaging.” (Voice of Youth Advocates (VOYA))

For THE SUMMONING: “Action, danger, supernatural secrets, and a hint of romance--Armstrong’s world is one in which trusting the wrong person can have dire consequences. You’ll be desperate for a sequel.” (Melissa Marr)

For THE AWAKENING: “Armstrong’s vermiculate plot will exhilarate even readers new to the series...Teens grappling with their own transformations and alienating individuality will certainly follow these characters to the book’s final pages and into the next volume.” (Kirkus Reviews (starred review))

For THE AWAKENING: “Chloe and her fellow supernatural teens struggle to find someone who will help them combat the group that’s trying to take them hostage, and there’s never a slow moment in their journey or a false line in Armstrong’s writing.” (Charlaine Harris)

For THE AWAKENING: “Kelley Armstrong has created a gritty, realistic world both teen and adult readers will enjoy. Edge-of-the-seat reading, with plenty of surprises. I want the next installment now!” (Kim Harrison)

“This nail-biting climax to the series continues to captivate readers with its edge-of-one’s-seat pacing. Armstrong’s story is full of action, romance, deception, and intrigue as well as complex characters and serious teenage issues. A satisfying addition for fans of the supernatural.” (School Library Journal)

When librarians finally granted Kelley Armstrong an adult card, she made straight for the epic fantasy and horror shelves. She spent the rest of her childhood and teen years happily roaming fantastical and terrible worlds, and vowed that someday she'd write a story combining swords, sorcery, and the ravenous undead. That story began with the New York Times bestselling Sea of Shadows and continues with Empire of Night.

Armstrong's first works for teens were the New York Times bestselling Darkest Powers and Darkness Rising trilogies. She lives in rural Ontario with her husband, three children, and far too many pets.

Descrizione libro Hardcover. Condizione: New. Condizione sovraccoperta: New. 1st Edition. FIRST EDITION/FIRST PRINTING with COMPLETE number line beginning in 1. HAND SIGNED & DATED MAY12/10 ON THE TITLE PAGE BY KELLY ARMSTRONG where she added the tagline "The End.Almost". - Fine in a Fine Dust Jacket. THE BOOK IS IN AS NEW & UNREAD CONDITION - tight, crisp and square, no bumping. Not remainder marked or price-clipped. AVERY COLLECTIBLE COPY OF THIS BOOK. PHOTOS OF THE ACTUAL BOOK SENT UPON REQUEST. ALL BOOKS SHIPPED IN BOXES WELL PROTECTED. THIS BOOK IS OFFERED HERE AT AN INTRODUCTORY PRICE FOR OUR RE-GRAND OPENING, IN APRIL ALL BOOK PRICES WILL BE ADJUSTED TO REFLECT THE COLLECTIBLE MARKET VALUE. A VERY COLLECTIBLE COPY OF THIS BOOK - PHOTOS OF THE ACTUAL BOOK SENT UPON REQUEST. THIS IS AN INTRODUCTORY PRICE FOR OUR GRAND RE-OPENING. ALL PRICES WILL BE ADJUSTED IN APRIL TO REFLECT MARKET PRICES. The boards Are Clean, Not Bumped. Fore Edges Are Clean. Dust Jacket Is In Fine Condition. No Chipping, Crinkles, or tears. Not Price Clipped. All books are boxed and shipped with bubble wrap - ALL BOOKS HAVE BEEN BOXED IN CLIMATE CONTROLLED STORAGE AND HAVE NOT BEEN TOUCHED BY ANY OTHER HUMAN THAN ME FOR AT LEAST THE LAST 10 YEARS - ALL BOOKS ARE SEALED AND BUBBLE WRAPPED AND SHIPPED IN BOXES - YOU CAN BUY HERE WITH CONFIDENCE KNOWING THAT A BUNCH OF STRANGERS HAVE NOT HANDLED YOUR BOOK -. Signed by Author(s). Codice articolo 000337

Descrizione libro Hardcover. Condizione: New. Condizione sovraccoperta: New. 1st Edition. An Outstanding Copy - Signed By The Author On The Title Page. Author'S Signature Only. A First Edition, First Printing, With The Corresponding Number Line. Book Is In Fine Condition. Boards Are Clean, Not Bumped. Fore Edges Are Clean. Interior Is Clean And Legible. Not Remaindered. Dust Jacket Is In Fine Condition. Not Chipped Or Crinkled. Not Price Clipped. Dust Jacket Is Covered By Mylar Brodart. Thanks And Enjoy. Signed by Author(s). Book. Codice articolo 006085