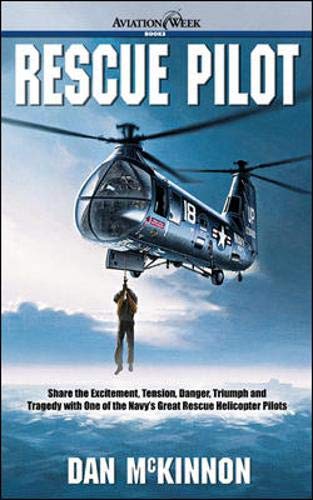 'Dan McKinnon, extraordinary helicopter pilot, brings alive the excitement and occasional terror of rescue at sea. An exciting hair raising and reverting tale of the largely untold story of helicopter resuces at sea' - Neil Armstrong, Astronaut. 'Just Great. It's going to be of tremendous interest to all naval helicopter pilots present and future and to the people who want to know more about this aspect of military flight. Boy, you've unleashed a flood of memories' - Bill Stuyvesant, legendary navy helo pilot. A daring Cold-War warrior recounts the thrills of high-sea helicopter rescue missions. Within the pages of "Rescue Pilot" distinguished naval aviator Dan McKinnon brings to life the dramatic at - sea helicopter rescues he participated in during his anything but peaceful 'peacetime service' in the United States Navy from 1956 to 1959.Helicopter flight itself, not to mention vertical-lift rescue and evacuation was in its infancy at that time, so pilots like Dan had to 'learn as they go', executing daring at-sea rescue missions from air carrier flight decks. Rough water, treacherous weather and risky cold-war conditions were all part of a day's work. Along with dramatic rescues, you'll participate in ship-to-ship replenishments, pick-ups and transfers, mine detection, and radar calibration operations. Dan also provides fascinating insider glimpses of peacetime naval life, long periods at sea, survival training, early helicopter technology, flight deck operation, and an incident-by-incident account of the U.S. Navy's involvement in the Formosa Straight crisis. In "Rescue Pilot" Dan McKinnon skillfully interweaves technical and historical information with his own thrilling real-life experiences ...and tells a story as only a man who has put his life on the line to save others can.

In Rescue Pilot, distinguished naval aviator Dan McKinnon brings to life the dramatic at-sea helicopter rescues in which he participated during his anything but peaceful peacetime service in the U.S. Navy. Helicopter flight in the 1950s was still in its infancy, so pilots like McKinnon had to learn as they went along. Rough water, treacherous weather and risky conditions were all part of a day's work. The author, the last chairman of the Civil Aeronautics Board and now owner and CEO of North American Airlines, interweaves technical and historical information with accounts of his own rotary adventures. McKinnon holds the U.S. Navy peacetime helicopter rescue record with 62 air-sea seasaves. (Business & Commercial Aviation 2003-02-01)

Dan McKinnon has written a book that all helicopter pilots in particular as well as all carrier aviators together with sea-going sailors and Marines past and present will enjoy and war like an old sweater. This is the story of one man's incredible experience as a young Navy helicopter pilot written through the eyes and thoughts of events as they happened. Events that were filled with on-the-edge excitement, requiring great courage, commitment and professional skills. Events that not only shaped his life and character for all time, but also had the same effect on many of those he rescued. Rescue Pilot is not the story of one man, it is the story of the combined skills and courage of the pilot enlisted teams that routinely stand in harm's way to save lives when things go wrong in the most hazardous environment possible.

Dan McKinnon takes the reader through his early attraction to flight and the commitment it takes to meet the demands of those who earn their "Navy Wings of Gold." His description of the training and teamwork associated with the mission of helicopter rescue pilot, documents the hours of preparation it takes for these pilots to make the impossible seem routine. More than anything else, Rescue Pilot is a story of the character, confidence, courage, teamwork, adventure, and willingness to take risks among Navy helicopter crews charged with the mission of rescuing those whose lives are in jeopardy. The incredible responsibility, independent decision making and accountability placed on a junior officer from the first day he reports to his new squadron serves to remind those who follow this path to take advantage of every training opportunity. Reporting ready on arrival is not just a slogan in this business.

The time frame for the majority of the action takes place on a deployment to the Western Pacific from July 1958 through January 1959 aboard the cruiser USS Helena (CA 75). The Helena was to be the flag ship of the Commander, US Seventh Fleet and LTJG McKinnon was to be the Admiral's personal command pilot. While this period covers a portion of the tensions in the Taiwan Straits, the operational intensity is typical of most helicopter deployment on cruisers and guided missile destroyers. When you have the responsibility of moving the Big Boss among all units and being at the leading edge of flying never-ending series of VIPs to and from the Flag Ship, you understand the meaning of being in the "Heat of the Kitchen." In this environment, Rescue Pilot shares with the reader the challenges, frustrations, humor, and opportunity to make an impact. When you are an air force of one and your passenger is the Fleet Commander, as they say in Naval Aviation, your opportunities to excel are unlimited. Only the very best get these choice assignments regardless of rank. Dan McKinnon was clearly up to the task.

Dan McKinnon's recorded on scene recollections and thoughts, during his two years of squadron life as a helicopter rescue pilot individually credited with 62 life saving rescues, providing both entertaining and enlightening reading. For those currently employed in this dangerous profession it will provide great satisfaction and pride to be part of this wonderful team. For those looking back to past experiences, as Dan McKinnon has done, it will place them once again in an environment and life style that only those who have lived it can truly appreciate. All in this category would go back in space to that time in a heartbeat. For those still trying to choose their profession, this book will motivate those with the competitive spirit to follow the course to earn those coveted "Navy Wings of Gold." A course that only the truly motivated should start and only those with the right stuff will complete. Dan McKinnon had and has the right stuff. His book should be in every aviator's library as a must read. (Rotor Review 2002-05-01)

Dan McKinnon (Jamaica, NY) is an expert in commercial aviation travel and survival whose background includes special projects for the CIA and extensive military and civilian study in survival, captive, and POW situations. A former Navy pilot, Mr. McKinnon specialized in rescue efforts and techniques and holds the Navy peacetime helicopter rescue record in air-sea saves. From 1981-1984 he served as Chairman of the Civil Aeronautics Board (CAB) under appointment by former President Reagan, overseeing the implementation of airline deregulation and the shutdown of the CABthe only regulatory agency ever closed. Mr. McKinnon is President of North American Airlines.