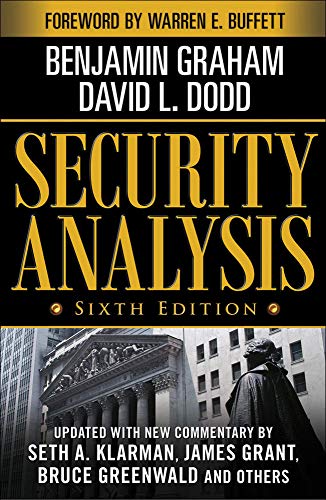 "A road map for investing that I have now been following for 57 years."
--From the Foreword by Warren E. Buffett

First published in 1934, Security Analysis is one of the most influential financial books ever written. Selling more than one million copies through five editions, it has provided generations of investors with the timeless value investing philosophy and techniques of Benjamin Graham and David L. Dodd.

As relevant today as when they first appeared nearly 75 years ago, the teachings of Benjamin Graham, “the father of value investing,” have withstood the test of time across a wide diversity of market conditions, countries, and asset classes.

This new sixth edition, based on the classic 1940 version, is enhanced with 200 additional pages of commentary from some of today’s leading Wall Street money managers. These masters of value investing explain why the principles and techniques of Graham and Dodd are still highly relevant even in today’s vastly different markets. The contributor list includes:

Featuring a foreword by Warren E. Buffett (in which he reveals that he has read the 1940 masterwork “at least four times”), this new edition of Security Analysis will reacquaint you with the foundations of value investing―more relevant than ever in the tumultuous 21st century markets.

“The biggest event in the world of investment publishing this year looks certain to be the re-publication of a book that came out almost three-quarters of a century ago.” ( Financial Times 2008-06-17)

Benjamin Graham is considered to be the founder of value investing and taught at Columbia University’s Graduate School of Business.

David L. Dodd was a colleague of Graham’s at Columbia University, where he was an assistant professor of finance.

Descrizione libro Softcover. Condizione: New. Brand new book. This is an international edition textbook with identical content as the US version and is usually paperback bound instead of hardcover. We ship all our orders from CA/IL, USA (depending on your address) and NOT from Asia! Buy with confidence from a 5-star US based seller. Choose expedited shipping for superfast delivery with tracking. Codice articolo 1921|9780071592536

Descrizione libro Condizione: New. Brand New Paperback International Edition.We Ship to PO BOX Address also. EXPEDITED shipping option also available for faster delivery.This item may ship from the US or other locations in India depending on your location and availability. Codice articolo ABBNN-5360