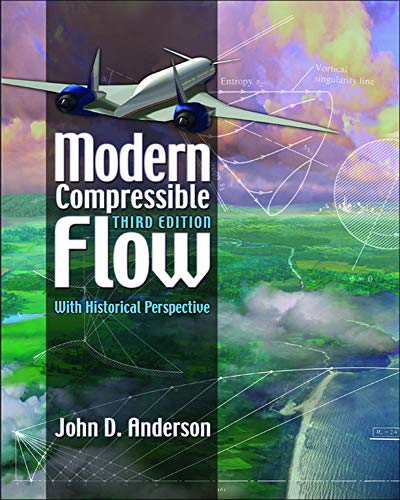 Anderson's book provides the most accessible approach to compressible flow for Mechanical and Aerospace Engineering students and professionals. In keeping with previous versions, the 3rd edition uses numerous historical vignettes that show the evolution of the field.New pedagogical features--"Roadmaps" showing the development of a given topic, and "Design Boxes" giving examples of design decisions--will make the 3rd edition even more practical and user-friendly than before.The 3rd edition strikes a careful balance between classical methods of determining compressible flow, and modern numerical and computer techniques (such as CFD) now used widely in industry & research.A new Book Website will contain all problem solutions for instructors.

2 Integral Forms of the Conservation Equations for Inviscid Flows

12 The Time-Marching Technique: With Application to Supersonic Blunt Bodies and Nozzles

Appendix B An Illustration and Exercise of Computational Fluid Dynamics

Descrizione libro Condizione: New. Brand new book. This is an international edition textbook with identical content as the US version. We ship all our orders from CA/IL, USA (depending on your address) and NOT from Asia! Buy with confidence from a 5-star US based seller. Choose expedited shipping for superfast delivery with tracking. Codice articolo 9780072424430

Descrizione libro McGraw-Hill Education. soft cover. Condizione: New. International Edition. No supplemental materials. International Editions may have a different cover or ISBN but generally have the exact same content as the US edition, just at a more affordable price. In some cases, end of chapter questions may vary slightly from the US edition. International Editions are typically printed in grayscale, and likely will not have any color throughout the book. New. Books ship from multiple locations depending on availability. All orders are shipped with tracking information. We take pride in our customer service. Please contact us if you have any questions regarding this listing. Codice articolo 9110